Last May, through Instagram stories and Twitter hashtags, Palestinian youth were able to make their voices heard throughout the world and mobilize an uprising across the fragmented parts of occupied Palestine. The uprising started with a call for support by Muna and Mohammed El-Kurd, through their personal social media accounts, to stop the forced displacement taking place in their Jerusalemite neighborhood of Sheikh Jarrah. Soon the twin siblings made headlines in international media and brought hundreds of thousands around the globe to march for their cause in some of the largest demonstrations in history in support of Palestine. 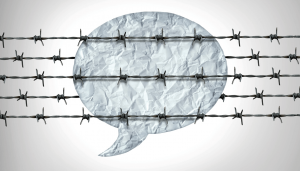 Palestinians have long been turning to digital tools to combat the hardships imposed on their lives by the occupation. They have used the internet since the 1990s to connect with each other and with the world, in spite of territorial fragmentation. Palestinian officials have referred to Palestine’s growing presence in the digital world as part of “establishing an independent state” and even “liberation.”*1 On the other hand, Israeli officials have continued to take issue with the Palestinian presence and narrative in the digital realm. In 2009, the Israeli prime minister explicitly stated that any future Palestinian state “should not have control over its electromagnetic field.”*2

In Palestine, the grave human rights violations committed under Israeli occupation are largely mirrored in the virtual world. This is especially evident in Israel’s dominance over infrastructure. In the same manner, Israel maintains control over natural resources and unequally distributes them in favor of Israeli citizens. Nearly all information and communications technology infrastructure across the occupied Palestinian territory (oPt) exists under Israeli control. All domestic and international connections made on telephones, cell phones, and the internet in Palestine must at some point pass through the Israeli backbone. This has made services for Palestinians significantly more costly and lower in quality than those on the Israeli side. As a result, these limitations present a serious threat to the Palestinians’ right to access the internet. 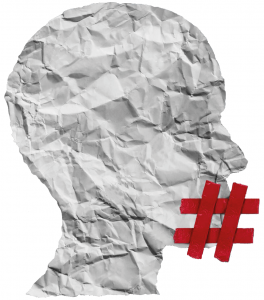 In addition to Israel’s use of the digital realm as a space of control, it has also used it as a means to control Palestinians. First, Israel has repeatedly arrested Palestinians for practicing their right to freedom of expression on social media. These arrests were backed by Israeli legislation that vaguely defines “terror” and “incitement” and arbitrarily equates words with real-life actions. One of the most recent cases is perhaps the arrest of Muna and Mohammed El-Kurd from their homes in Sheikh Jarrah in Jerusalem, under charges of “threatening national security,”*3 for advocating on social media against forced displacement.

In addition to the Israeli government, Israeli private companies also threaten the digital rights of Palestinians. In a 2019 investigation, for instance, it was revealed that the Israeli surveillance tech company AnyVision had used the facial data of Palestinians, without their consent, in the development of its facial-recognition technologies. Further, a group of international civil society organizations recently revealed the use of Israeli manufactured spyware known as “Pegasus” in targeting over 50,000 activists and public figures across the globe.

Such violations are also committed by international tech companies. Facebook, for example, continues to work with the Cyber Unit of the Israeli Ministry of Justice to censor alleged “incitement” and “hate” speech by Palestinians. Ironically, very little has been done by Facebook to combat hate speech in Hebrew against Palestinians. Other examples include Google’s refusal to end discrimination against Palestinian users through its maps, Airbnb’s listing of properties in illegal settlements, and PayPal’s refusal to extend its services to Palestine, whereas it functions normally in Israeli areas, including in illegal settlements.

In the internal arena, the Palestinian Authority has used its cybercrime law to silence critical and oppositional Palestinian voices through arrests and website-blocking. Similarly, Hamas uses its own “misuse of technology” penal code to crack down on activists and journalists. Such ongoing violations can further result in the chilling phenomenon of users beginning to censor their own voices as a result of fear. This is more likely to happen to the most vulnerable in Palestinian society, those for whom the internet is often an essential avenue for communication, expression, and support-seeking.

Digital rights refer to the same human rights that all persons enjoy in the offline world, but extended into the digital realm. These include the right to privacy, freedom of expression, freedom of assembly, and freedom of association. Many countries have further recognized access to the internet as a fundamental human right.*4

In spite of violations by multiple parties, the digital realm has continued to represent an active and valuable space for Palestinians to make their voices heard by the authorities, the international community, and the world. This was most evident in May 2021, as we saw Palestinian youth utilize social media in creative ways to advocate for Palestinian human rights and mobilize support on the local and international levels.

Under the umbrella of the #SaveSheikhJarrah social media campaign, for example, which was launched by the now-well-known twin siblings Muna and Mohammed El-Kurd through their private social media accounts, Palestinian youth were able to advocate internationally for their right to be protected against forced displacement, as hundreds of thousands of people across the globe marched in support of the Sheikh Jarrah neighborhood. 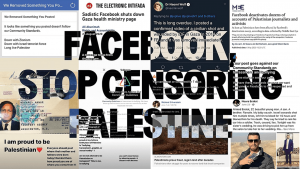 Palestinians once again used social media and digital tools to advocate for their right to freedom of expression in response to the Palestinian Authority’s killing of social media activist Nizar Banat. Users shared art, videos, statements, and infographics to raise awareness about the incident, and mobilized large protests that took place across the oPt and even in the diaspora.

Similarly, Palestinian youth continued to mobilize through social media and digital tools, even to combat internal social injustices, such as gender-based violence, through building community, raising awareness locally and internationally, and organizing action online and offline. This was evident, for example, in the Palestinian feminist movement Tal3at, which first began through online posts on a variety of social media platforms in response to the “honor killing” of Isra’ Ghrayib in 2019.