In late August 1775 the Ottoman navy attacked Acre from the sea, facing strong resistance from Palestinian Arab forces. But when the Arab leader Dhahir al-Umar al-Zaydani, at 85 years of age, realized that his long-time deputy commander’s betrayal would cause defeat, he decided to leave the city that was under heavy bombardment to spare civilian lives. As he departed through Acre’s gates, an Ottoman bullet hit his neck and threw him off his horse. An enemy soldier rushed to decapitate him. Dhahir’s severed head was then delivered to Istanbul. With this death, an important period of Arab national freedom ended.


Sheikh Dhahir al-Umar al-Zaydani was most notable for his ability to rule wisely, defy the Ottomans, and form an early Palestinian government. Born in 1689 in the Galilean village of Arrabat al-Battuf, east of Acre, Dhahir in the mid-eighteenth century became an autonomous Arab ruler of northern Palestine, while the region was still part of the Ottoman Empire. For much of his reign, that started in the 1730s and lasted a lifetime, his domain was mainly the Galilee. Successive headquarters included Tiberias, Arraba, Nazareth, and Deir Hanna. After 1746, he ruled from Acre, fortifying the city and making it a center of the cotton trade between Palestine and Europe. In the mid-1760s, he reestablished the port town of Haifa as well. At that time, he served as governor of Sidon, Nablus, Jerusalem, Gaza, Ramla, Jaffa, and Jabal Ajlun. In 1768, Sultan Mustafa III pronounced him Sheikh of Acre; Emir of Nazareth, Tiberias, Safed; and Sheikh of the entire Galilee.

Dhahir successfully withstood assaults and sieges by the Ottoman governors of Sidon and Damascus who attempted to diminish his influence – frequently supported by the rural people in the territories under his government that extended from Beirut to Gaza and Ajlun. His strong personality was charismatic and powerful; he was firm yet socially welcoming and compassionate.

A successful entrepreneur, Dhahir developed cotton and olive oil export to Europe and used the revenues to strengthen government and attend to the welfare of the inhabitants. He ran his administration wisely and firmly, determined to differentiate himself from the Ottoman governing body maintaining domestic security. His flexible taxation policies were well appreciated by the local population. His sense of nationalism was strong and encouraged the freedom of worship and beliefs. Dhahir allowed the building not only of mosques, such as the Omari Mosque in Tiberias, but also of churches, especially in Christian villages such as Deir Hanna, as well as St. Gabriel Church in Nazareth. He developed society through the construction of commercial buildings, dwellings, and fortifications throughout Galilee.

Dhahir and his forces strove to bring important geographic locations, including many small villages, into his coalition of governance, sometimes through marriage. Thus, he secured the loyalty of the fortified village of Deir al-Qassi by marrying the daughter of its sheikh, Abd al-Khaliq Salih. 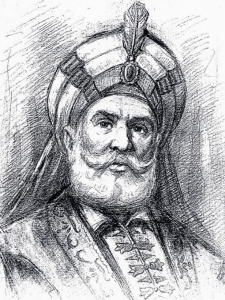 The period between 1744 and 1765 was the “golden age” for Dhahir. His rule secured the life of poor villagers from Beirut to Gaza. This stability and economic-agrarian development encouraged people from other parts of the Ottoman Empire to immigrate to Galilee. Dhahir embraced a policy of abetting farmers to cultivate and harvest their fields and facilitated the export of agricultural products. A remarkable policy at that time was that he provided loans to the poor, gave farmers free seeds, and offered tax relief during drought seasons or economic hardship, partly to encourage new farmers to start their own agricultural farms. At times, he took over the responsibility for outstanding payments for farmers’ or merchants’ debts. Dhahir maintained and even advanced economic relations with Europe through direct economic partnerships, rather than depending on the Ottoman government. He promoted close ties with French trading companies, not knowing that 25 years after his death, Napoleon would come to take over his city. Moreover, Dhahir earned people’s respect for his strong measures against, thieves, bandits, and outlaws. But he was smart and dedicated enough to regularly pay taxes to the Ottoman authorities, thus maintaining a degree of stability in his relationship with Istanbul.

Sultan Mustafa III was more of a philosopher and a romantic than the sultan of a large empire. Ever-increasing conflicts between Arab clans and conspiratorial powers in the high echelons of the Ottoman government proved fateful. Taking advantage of a state of weakness in 1774, immediately after the sultan died and before Sultan Abdul Hamid I embarked on the business of governing the empire, Dhahir’s enemies, including some members of his family, formed an alliance against him and supported the Ottoman navy attack on Acre in 1775.

At school, we were taught about great Palestinians, but unfortunately very little is being taught, even today, about personalities such as Dhahir al-Umar al-Zaydani. Certainly a forerunner of Palestinian nationalism, he was one of the greatest Palestinian personalities in the eighteenth century. Had I known about him back in my school days, I would not have wondered very often about why we do not have Arabs like Bismarck or Garibaldi.