It is becoming very clear not only for us Palestinians but also for many observers of our country that our economic future lies in services led by the tourism sector and its related ancillary services. Palestine caters to a distinctive form of tourism that has proven its sustainability from time immemorial. It began with Canaanite fertility worship sites that over the years have been transformed into places of veneration of Al-Khader (lit. The Green, known among Christians as Saint George), a figure honored by the three Abrahamic faiths and visited on Al-Khader Day (November 15) and at any other time when a person may want to pray to Al-Khader, asking him to intercede to heal or bless.


I have stated elsewhere that while monotheistic thought may have originated in Pharaonic Egypt and Ancient Babylonia, it gelled most clearly in the hills of Palestine, possibly because when we are suffering, we turn to God for help. At the weakest points in our lives, with no solution in sight, we invoke God: Allah yirham (may God have mercy), Allah iyeen (may God help), Allah yishfi (may God cure), Allah yijlibna raht el-bal” (may God give us peace of mind) are words that many of us utter daily. I assure you that there are plenty of circumstances in our lives in which we address Him without hesitation. Surely, God is a source of consolation for the weak. As this part of the world has been occupied and invaded throughout history, we remain the weak people in the region, in need of a god who is more powerful than all the gods of the surrounding empires. So this weakness may have contributed to the proliferation of faiths on this tiny piece of land that borders three continents.

The first recorded travel to our country took place with Abraham’s journey to our lands, as ordered by God in Genesis 12:1, “Leave your native country, your relatives, and your father’s family, and go to the land that I will show you.” Moses was another pilgrim, Christ engaged in the traditional Jewish pilgrimages of his time, and Prophet Mohammad took a physical and spiritual nocturnal journey‎ when, during al-’Isrā’ wal-Miʿrāj, he ascended to heaven from Al-Aqsa Mosque in an act of pure pilgrimage.

As Palestine is connected to far-away places by the Mediterranean Sea and constitutes a natural land bridge between three continents, the armies of the surrounding empires as well as traders with their laden caravans passed through this land as they invaded or traded with and within the various flourishing empires on three continents. Our country lies at the crossroads of two main historical north-south highways: the renowned King’s Highway to Palestine’s east in what today is Jordan, and the Via Maris (the Way by the Sea) that starts in Egypt, passes through Gaza, and continues north, crossing Marj Ibn Amer (Jezreel Valley), before climbing up to Damascus. Between these historical highways, there are trunk roads. The best known among them is the Spice Route that connects the King’s Highway with Via Maris in Gaza and took its name from its very function. The caravans laden with spices from the Asian subcontinent were delivered through our lands to Ancient Egypt and to the rest of the Roman Empire.


The armies and traders who traveled these historic highways had to be served. Moreover, we enriched their goods with salt from the Dead Sea. Through us was carried also the know-how for the preparation of pasta and noodles, brought by Arab traders from China and not only incorporated into Palestinian cuisine but also transferred to Italy – which became known for its culinary richness that is based heavily on pasta products. This flow of cultural ingredients led to the very rich Palestinian kitchen. In a workshop titled “The Mediterranean: A Sea that Unites – A Sea that Divides,” the point of reference was an observation made by Fernand Braudel, who remarked that what characterizes the history of cultural contact along this sea is the metaphor of recouvrement, the superimposition or imbrication of cultures within each other. There is no such thing as a pure, genuine, unspoiled culture in the Mediterranean. Each culture has lived among its neighbors, each has expressed values, preferences, traditions that are not only its own but also those of cultures which, at an official level, have been considered antagonistic, even inimical.

In the sixteenth century, the Ottoman Empire concluded several capitulation agreements with the various European powers. These agreements stipulated that the traders who entered the Ottoman Empire were exempt from local prosecution, local taxation, and local conscription to encourage commercial exchange with Western merchants. Very quickly, European powers competed for influence over the local population and the holy places associated with Christianity. To achieve their goals, these powers opened post offices, constructed compounds to lodge pilgrims and tourists from their own nations, and established hospitals as well as schools, churches, and monasteries that served both the local population and foreign visitors. Most of these efforts were initially focused on Jerusalem. They re-surged with the Ottoman Empire’s opening up to Western investments in the mid-nineteenth century.

Jumping to the present, it is clear that for the near future, the Israeli occupation will continue to maintain control over the Palestinian territories. This entails all the related so-called security concerns that do not serve Palestinian well-being but encumber the movement of goods and persons between the various Palestinian metropolitan centers and villages, including also our holy places. These Palestinian cities and villages tend to be blessed with a large capital of sites of religious, archeological, cultural, and natural value that are powerful magnets for pilgrims and tourists of the three monotheistic faiths and for cultural tourism. So the challenge for us as Palestinians is how to develop our tourism sector to its full potential under duress.

Over thousands of years, our Palestinian destination has become a unique and unparalleled focus and destination for the adherents of the three Abrahamic faiths.

The Palestinian Ministry of Tourism in cooperation with the professional tourism associations and the educational institutions involved in tourism and hospitality education and training are engaged in great efforts to meet these taxing challenges with the help of various donor countries. These donor countries are cognizant of the fact that we have to develop this important promising economic sector to provide employment opportunities and income for the growing ranks of our young people. 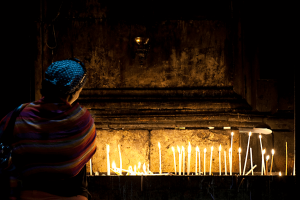 Bethlehem University (BU) in 1973 took the lead by establishing the Tourism Education and Hospitality Training Institute. It also has taken upon itself a strategic future plan to help meet these formidable challenges and address the issues of capacity building to supply the industry with well-educated and highly trained human resources. To successfully carry out this task despite limited space on campus, BU purchased a piece of property close to the main campus, the largest such expansion in BU’s history. This property is now called the Mount David Campus and includes three cultural buildings that possess significant history and exhibit unique Bethlehem heritage architecture. Bethlehem University furthermore established the Bethlehem University Tourism Institute(BUTi) that engages to educate, train, and promote the tourism sector. Most importantly and uniquely, BUTi has organized itself to meet these challenges, recognizing that because Palestine is a developing country, any successful development plan must stand like a table on four legs.

The first leg is the public sector. Tourism policy acts as a set of guidelines to determine which specific objectives and actions should be pursued to meet the needs of the particular destination area under consideration. Policies regulate the actions not only of the government but also of those in the private and nonprofit sectors.

Second is the private sector. The tourism field will always be a private-sector-led industry that will make the needed investments in the tourism industry and help determine the required training profiles. The best approach is to forge a partnership between industry and education.

The third leg comprises the educational institutions, vocational training centers, and specialized research institutions. For BU to be an effective partner in tourism development, it has not only to educate and train but also to undertake serious academic research that can help the public sector and private sector meet the goals of their development plans.


The fourth leg, which is very important, is civil society. An active civil society is essential in caring for the “common good.”  Anytime the public and private sectors come together in the world without an active civil society, they tend to corrupt each other. As our tourism product is unique given that it is heavily dependent on faith-based tourism, the right civil society can help Palestine maintain the quality of our tourism product and its religious and spiritual content and make a contribution to the way we serve pilgrims. We are uniquely different from other parts of the world as we have the historical presence of religious bodies who are not only guardians of some of the most important holy sites but who can also act as guardians of the efforts to develop the kind of tourism that has been with us for thousands of years. Within their institutional framework, religious bodies provide services for pilgrims not only through sites of religious importance, a main focus for pilgrimage touring programs, but also in the field of hospitality and religious tour guiding. Thus, they act not only as religious guardians but also as a very important component of the private sector that we cannot afford to ignore.

The wealth of Palestine’s tourism product does not stem from faith-based tourism alone. We must tap into our rich cultural heritage as we promote Palestinian tourism and Palestine as a cultural destination.

The BUTi board includes representatives of these aforementioned sectors whose role is to engage in ongoing dialogue between concerned stakeholders to provide a deeper understanding of how to educate new highly skilled graduates who are ready to face the challenges of increased competition. Thus, it strives to bridge existing gaps between the concerned public sector and civil society, the hospitality industry, and hospitality education institutions so that the latter may graduate well-qualified professionals whose skills are compatible with the labor-market challenges of the modern tourism industry. This will enable the tourism industry to be more competitive, more effective, and more innovative. 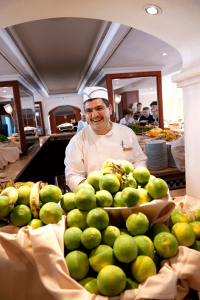 At the beginning of this article, I surmised that monotheism may have gelled in our lands because, historically, we have been weak. But there is a duality to this. What happened in our lands had global effects, as billions of adherents of the three monotheistic faiths have transformed the world. These influences helped create a tourism product for Palestine that has been around for thousands of years and that will last thousands of years in the future, both in its pilgrimage and its cultural forms. This is a unique legacy that Palestine contributes to the rest of the world.


As we Palestinians move forward and learn from our experiences and the experiences of our friends, maybe we can become a shining example of tourism development and tourism education and training for other parts of the world that are forced to develop their tourism sectors in difficult environments.