By Courtesy of GROW Project

Suad, Raghad, Rama, Nida, Amani, and Maysoon are six young Palestinian women who have one thing in common: they all achieved very high scores in their high school diploma exams, enabling them to easily be accepted into various engineering colleges in the West Bank. After five years of commitment and hard work, they have all successfully graduated as proud engineers. Their belief that hard work pays off, however, was quickly met with multiple employment rejections, leaving them with a sense of despair and bitterness.

So, what was the problem that faced a cohort of such intelligent and energetic young women? The limited absorption capacity of the labor market? The employers’ bias towards hiring male engineers? A lack of competitiveness? The social stereotypes and perceptions about which jobs are acceptable for women? The women’s overestimation of their readiness for or awareness of opportunities within this sector?

The response most probably includes a bit of all the above. The mix of barriers to women’s integration in the labor market, in general, and the renewable-energy sector, in particular, requires a collective and concerted effort by the renewable energy sector stakeholders and policy makers to ensure that we move towards renewable energy growth by addressing all the above-mentioned barriers in order to grant men and women alike an inclusive and equitable sector with opportunities for all.

These women, who are among 100 young – in their twenties – Palestinian female engineers who aim to advance in the power, electricity, and energy sector, are the ones targeted by the GROW project. All of them have hope and are diligently working to find a place for themselves in the renewable energy labor market while contributing to its development and growth as they dreamed and studied to do.

Two years ago, the GROW project conducted a workshop on renewable energy market systems with key stakeholders in the sector, including the Palestinian Energy and Natural Resources Authority (PENRA), who emphasized that the sector lacks certified energy auditors in the West Bank and Gaza, which creates a gap as well as an opportunity. The energy auditor is a specialized professional who helps improve the energy efficiency of both residential and commercial buildings. As globally forecasted, the renewable or alternative energy market will continue to expand at a fast pace in the coming years due to the high cost of conventional energy sources and their increasing negative environmental impacts. This pattern is evident locally, especially with the high dependency on Israeli sources of energy, the high costs, and the inconsistent and politically influenced supply that results in increased electricity cuts, which have widened in the last few years to include most parts of the West Bank.

Such factors have led the government and the private sector to focus their efforts on diversifying energy sources to minimize the heavy reliance on Israeli suppliers and solve increased supply challenges. Similarly, business and residential consumers have become increasingly conscious about energy costs, supply risks, and negative environmental impacts. This has led to the creation of a niche market in which energy auditors can thrive and earn an income from supporting consumers in transforming to more reliable and efficient sources of energy. Energy auditors provide customers with actionable advice that can cut spending on energy by designing and maintaining energy-efficient residential and business buildings.

They do that through conducting hands-on tests and inspections to determine the source of poor energy efficiency. It is envisaged that effective promotion of this new function will stimulate the demand for energy audits by municipalities, real-estate contractors, and engineering offices, as well as residential consumers.

Effective promotion of the new function of energy-auditing professionals will stimulate demand for energy audits by municipalities, real-estate contractors, engineering offices, and residential consumers. Given that the energy-auditing field is not a sector with predefined gender roles, opportunities for pioneering and well-educated Palestinian women are plentiful.

In light of global and local evidence of the need for the energy-audit profession, introducing the first-ever cadre of young female energy auditors in the West Bank appears to be an opportunity that breaks gender-stereotypical roles of women, creates opportunities for self-employment for young female engineers, including starting up energy service companies, and fills an already-identified gap in the renewable energy job market.

Around 20 young female engineers out of the 100 targeted by GROW are being prepared through a series of technical training and certification programs to become the first generation of energy auditors to assume high-value technical functions in the evolving renewable energy sector. Suad, Raghad, Rama, Nida, Amani, and Maysoon will be remembered for being the first female champions to become certified energy auditors. This is the fruit of strong cooperation and partnership with PENRA, which facilitated the participation of GROW’s engineers in an international energy audit training course that has prepared them to take and pass an international exam, thereby enabling them to become the first batch of internationally certified energy auditors in the West Bank and the Gaza Strip.

To address some of the previously mentioned barriers, GROW targets 100 female engineers who participate in a training and capacity-building program followed by a six-month placement opportunity at renewable-energy enterprises to develop their technical skills and on-the-job training experience that is not covered at the universities.

GROW is also working to launch new opportunities for young engineers, including a renewable-energy innovation fund to promote innovation and entrepreneurship by engaging around 50 male and female youth in a hackathon-style journey followed by seed funding/incubation of the top-five solutions for energy challenges in the agribusiness sector.

To facilitate the adoption of renewable-energy solutions, GROW also promotes women-led MSMEs as adopters of clean energy by extending at least 36 photovoltaic systems to productive enterprises, which, in one way, cuts production cost and thus improves income and reduces negative environmental impacts.

Moreover, GROW believes in the importance of introducing females to the renewable-energy sector from a young age, starting with the technical vocational education and training (TVET) sector. To encourage female integration in the TVET institutes for RE, GROW will provide scholarships for a few female engineers to become renewable-energy technicians at Hisham Hijawi Technical College. This will address another gap in the labor market and enable females to seek employment.

These efforts are complemented by awareness campaigns on the benefits of and opportunities available in renewable energy to different segments, including young school students who will be provided with an interesting renewable-energy “snakes and ladders” game that enables them to learn at an early age about good energy practices and saving energy. The game will be in both print and electronic formats to allow as many students as possible to access, learn, and enjoy.

The year 2020 has been declared the year for youth by the Palestinian government. This compels us as individuals, projects, and partners to make every effort to open the windows of hope that have been locked for a while so that Palestinian female and male youth can spread their wings and pursue their dreams in an inclusive and just society. GROW takes this opportunity to invite renewable-energy stakeholders to join forces with us to create cooperative synergies in order to make sure that no youth is left behind.

Generating Revenue Opportunities for Women and Female Youth in the West Bank (GROW) is a project funded by the Government of Canada and implemented by Cowater International, in cooperation with the Ministry of National Economy, PENRA, the Ministry of Women’s Affairs, and the Engineering Association. 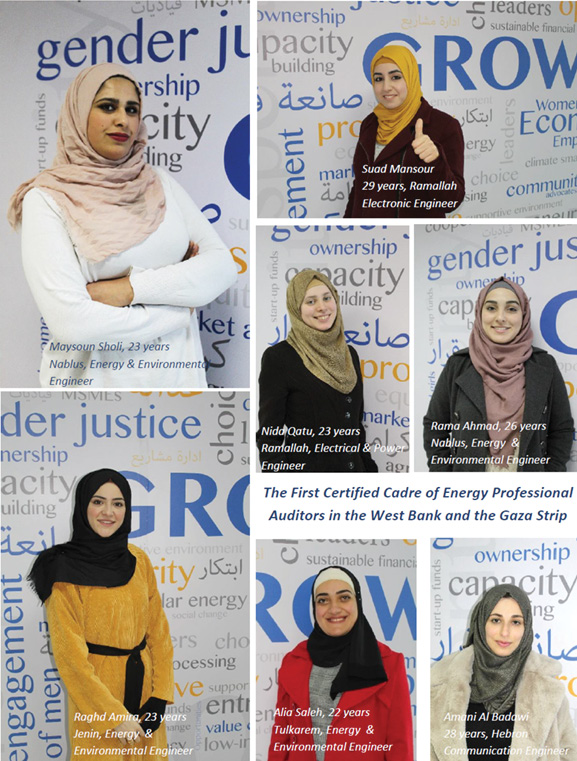