Chile has the largest Palestinian community in the diaspora outside of the Middle East, with outstanding members in all areas of human endeavor. It is my privilege to introduce here a number of artists of different generations who, with hard work and their hearts close to their roots, have developed their own path in the diverse world of art and a unique view of the world.

Salamé’s grandparents on both sides came from Bethlehem. She was born in Chile and graduated from Santiago College (1972). She then completed her advanced studies at CEGRA (Centro de Enseñanza Grafica) and CONAC (National Council of Culture) in Caracas, Venezuela (1979). During her time in Venezuela, 1973-1983, she was exposed to the rainforest – a pivotal experience in her artistic development, that continues to be a source of inspiration.

She moved to Washington, DC, in 1983, and subsequently, in 2009, established a vibrant print studio in Baltimore, where she lives now. Salamé remains an active member of the Baltimore arts community and a lifelong educator. As an interdisciplinary artist, she creates work that originates from extensive investigation into specific topics. In the pursuit of new ideas, she has conducted intensive field research in the Americas, Antarctica, and beyond. Her current project, We The Migrants: Fleeing/Flooding, was a travel exhibition at Goya Contemporary Gallery in Baltimore. The exhibition is based on migration resulting from climate change, and exacerbated by social and political impact.

Jaar studied film directing at the Chilean-North American Institute of Culture in 1979, and architecture at the University of Chile until 1981. During this period, he began his artistic work and became known in the Chilean art circuit with works such as Estudios sobre la felicidad (1979-1981).


Jaar was not part of Chile’s artistic elite led by the artists of the Advanced Scene. He stated that Estudios sobre la felicidad was a work rejected by his artistic milieu, which prompted him to leave the country. In 1982, having won a grant by the Fundación del Pacífico, he moved to New York “where he began to develop a solid and recognized international career.”

One of Jaar’s best known works, A Logo for America (1987), is shown on a large screen in Times Square, New York City.


A descendant of Palestinians and Syrians, Jorge Tacla lives and works in New York City and Santiago, Chile. After his studies at the Escuela de Bellas Artes, University of Chile, he moved to New York in 1981. His paintings have been exhibited internationally in galleries, museums, and biennials.

“Like much of Tacla’s work, his paintings represent a space of social rupture. These works situate themselves in the joints of a new architecture that arises in the wake of catastrophe – natural or man-made. Tacla perceives the devastation that results from such events as an opportunity to investigate structural systems that would otherwise remain unseen. To signify such unsettled worlds, he uses pictorial languages that are obsessive: sometimes repeating the images, sometimes repeating the same gesture in the same space many times until the visual register is analogous to the trauma that prompts it. Tacla illuminates the variability of identity for victim and aggressor – an agent who is disassociated from his or her own identity – and the complexity of the assessment of guilt. These critical issues, and their situation in the larger, collective human experience, are the defining theoretical inquiries of Tacla’s work.”
In the series Señal de Abandono, he paints the reality of Gaza under attack, with expressionism and detailed views of rubbish. Tacla has received numerous grants, fellowships and awards, such as from the New York Foundation for the Arts (1987, 1991); the Eco-Art Award, Rio de Janeiro (1992); and from the John Simon Guggenheim Memorial Foundation (1988). In 2013, he completed a residency at the Rockefeller Foundation Bellagio Center, in Italy.


In 2019, his papers, which included forty years of drawings, correspondence, photographs, notebooks, and clippings, were acquired by the Smithsonian’s Archives of American Art.

Descendant of Syrians from Homs and Palestinians from Bethlehem, he is a painter and printmaker, as well as musician, composer, and musical producer. He has an art degree from the Pontifical Catholic University of Chile (2001) and, since 1999, has had more than seventy solo and group exhibitions in Chile, the United States, Canada, and Belgium. Highlights include his solo show When I Woke Up There Was No One, at the National Museum of Fine Arts of Chile (2013), Post Tenebras Lux, at the University of Chile Art Gallery (2022), his participation in Art Toronto Canada’s Fair (2015), and in Lineart, in Gent, Belgium (2008). He also took part in the Bethlehem District Diaspora Covention of 2021, and was a member of the board of directors of the Chilean Arab Institute of Culture (ICHAC).


His work is situated in a middle ground between reality and imagination, between the figurative and the abstract, in a terrain that could be called “the invisible real”. Although Mahana has explored different types of images and referents, all of his work is an attempt to transcend the codified look, the discourses made, the accepted dogmas, understanding painting as a gesture that captures on the canvas an image that comes from other perspectives and states of consciousness. It can be understood as figurative painting that combines different planes of reality: closed spaces or constructions, with open and natural spaces.

Recognized for his paintings of nocturnal landscapes, cities, roads, and broken vases, he is a representative of the Latin American visionary art movement. His work is found in international collections in the United States, Canada, England, Uruguay, Dominican Republic, Spain, Belgium, the Netherlands, Palestine, Peru, Argentina, Mexico, and China. 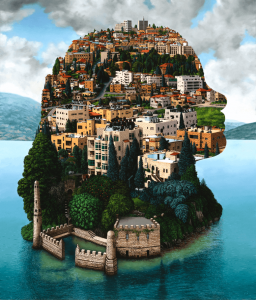 Mahana has a special relationship with Palestinian cultural life, as reflected in his recent body of work: the series Motherland and The Island of Palestine. He is also a music producer and has worked on several projects with members of the Beit Sahour branch of the Edward Said Music Conservatory. Finally, he is a founding member of the band Diaspora Trio, with which he played in Jerusalem, Bethlehem, Ramallah, and elsewhere in Palestine, in 2019.

Ignacio Bahna is a sculptor of Syrian origin who studied Fine Arts at the University of Barcelona, receiving two honor scholarships for academic distinction. He has developed much of his work in Europe and America, with solo exhibitions in the United States, Spain, Italy, England, Chile, and Mexico. His Mexico exhibition was staged with the support of an AMEXCID International Scholarship granted to Bahna by the Mexican government. In the past, Bahna lived in the United States, Spain, and Mexico. He now splits his time between his multidisciplinary studio in Santiago and his research platform “Observatorio”, located in the south of Chile, close to the border with Argentina.


His work has been exhibited in museums, galleries, and in public spaces both in Chile and abroad, as well as in contemporary art fairs such as Zona MACO (Mexico City), Volta (Basel), Pinta (New York and Miami), Art Lima (Lima), Chaco (Santiago), and Jugada a 3 bandas (Madrid and Barcelona).

“His works often defy gravity; the concept of the physical, space and time are recurrent in his creative development, as is the rigorous study of light. He subtly mixes natural elements with technology, striking a balance between the organic and the artificial.

“His installations, sculptures, and volumetric murals seek to lead the viewer into an experience, often being the one who activates or concretizes the work. This is the origin of his strong interest in architecture and site-specific installations.

“His projects are mainly focused on natural phenomena and the intervention of man in nature. He uses materials such as rocks, burnt wood, salt, resin, LED lights, among others.”


One of his sculptures has been on display at the Palestinian embassy in Chile.


Ximena Lama was born in Bolivia and grew up in Santiago, Chile. She is the granddaughter of Palestinians on her father’s side. She completed her studies with a Master of Business Administration from the University of Bern, and lived in Switzerland until 2021, then returning with her family to Santiago. The visual arts have always been her passion, and she became a collage artist. Her work reflects her Palestinian and Latin American roots as well as her exposure to European culture.

The following is from the artist’s website (lightly edited for language):

“Part of her artistic process is to be inspired by the endless fund of press and advertising as you browse through magazines. Sometimes she has a particular vision for a collage and then looks for suitable elements for it. Often, however, spontaneous ideas shape her creative work; she chooses what she addresses, what moves something in her or reminds her of something. A crucial role in the design of her collages plays the subconscious, which manifests itself in the course of the creative process and urges for materialization.

“In her collages, she processes searched, and incidentally found, designed events and more or less intuitive ones. Material is recombined, single images are used to create new images, and new details are highlighted. The esthetics of the materials, i.e., colors, shapes, texture, and contrast are important factors. In terms of content, her collages deal with topics such as the past, longing for the past, diversity of society, and consumer society, as well as gender, especially the role of the woman.

“With her collages, Ximena Lama wants to sensitize the viewer and introduce him to a confrontation with our world today. … In Shamed, for example, the destroyed buildings, presumably war ruins, the stone tomb, a soldier from the back, and two black-veiled persons in the lower left of the picture remind one of the harsh reality of the Middle East conflict. Misery, war, destruction that stretches for years. What remains is the yearning for peace.”


Lama’s exhibition, Retorno, will be on show at the Cultural Foundation of Providencia, Santiago, Chile, in December 2022.

Estefanía Tarud, whose grandparents are from Bethlehem, is a Chilean visual artist who works and lives in Santiago, Chile. She studied art at the Catholic University of Chile and throughout her career has experimented with different techniques, mainly painting, drawing, and engraving. Two years ago she dedicated herself to textile art, inventing a new embroidery technique that is effective in expressing themes linked to everyday life and the representation of light in twilight.
She has had solo exhibitions in Chile and participated in group ones, notably the Contextile 2022: Contemporary Textile Art Biennial, which took place this past September-October, in Guimarães, Portugal, and where she obtained an honorable mention; and the embroidery contest Hand and Lock, in London (2021) where she earned second place.

Tarud has created a new style of embroidery where the light is the protagonist and the background turns relevant. She is in love with the process and handmade actions. Her favorite subject is the domestic world and everyday actions, no matter how simple they are.


From her artist’s statement: “Through a simple straight stitch, I embroider on a black gabardine with cotton threads of different colors, respecting the space between stitches and integrating the background as a main element. The same image is displayed in the front and in the back. In the front, you can see the control and dedicated stitches, everything is in the right position to create a realistic story. But, in the back, you can see the process, the backstage of the work, the knots, the leftover threads, the mess … but the same image is just right there.”


Victor Mahana (www.victormahana.com) is a Chilean painter, composer, musician, and music producer of Palestinian descent. In his twenty-year career, he has had more than seventy exhibitions in Chile and around the world. He is one of the youngest artists to have had a solo exhibition at the National Museum of Fine Arts in Chile. He is also a founding member of the band Diaspora Trio.