I’m Aramaic and was born and raised in the Old City of Jerusalem. I speak eight languages and enjoy playing percussion. My life’s passion, however, is cooking. From 2009 until 2021, I was executive chef of the Legacy Hotel chain with venues in Jerusalem, Nazareth, and Haifa.
My concept is to fuse our local cuisine with new techniques and elements of cuisines from around the world to offer a high-quality, unique dining experience. I like to cook with one ingredient, presenting it in different textures. For instance, one of my dishes is a five-texture eggplant carpaccio. My passion for cooking stems from the fulfillment it gives me to serve people food and drink and share my life story and experience with them.
My career has been busy but rewarding. Traveling the world on culinary trips, I’ve participated in many competitions – and am happy to have won several awards. These trips have enriched my repertoire and exposed me to new concepts. My dream is to open a cooking academy to share my cooking experience with young students.
Some highlights of my career include obtaining a Master Chef Diploma and medal from England, establishing and heading the Culinary Hospitality Academy in Ramallah, and being guest judge at the TOP CHEF program in Dubai.
I was executive chef at Jericho’s Intercontinental Hotel and Resort, am a member of the prestigious international Chaîne des Rôtisseurs association, was part of the Chefs for Peace team, and participated in many international culinary competitions. In May 2013, I won the silver and bronze medals in the Ultimate Chef Challenge in Thailand. In September 2012, I participated in the American Culinary Diplomacy Program, an initiative of Michele Obama. At the 10th Gastronomy Festival in Istanbul, Turkey, in 2012, I won the silver medal in the individual competition and the bronze medal in the team category. Other competitions where I won medals include the Villeroy and Boch Culinary World Cup in Luxembourg, the open-air cooking competition in Bucharest, Romania, and the second Palestinian culinary arts cooking competition. I also represented Palestine and took first prize at the 2007 World Couscous Festival.
I am humbled to have cooked for kings and leaders of the world, including King Abdullah of Jordan, President Arafat, President Rabin, Shimon Peres, President Clinton, President Chirac, Prince William, President George W. Bush, and many more. 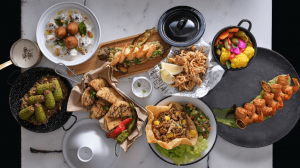