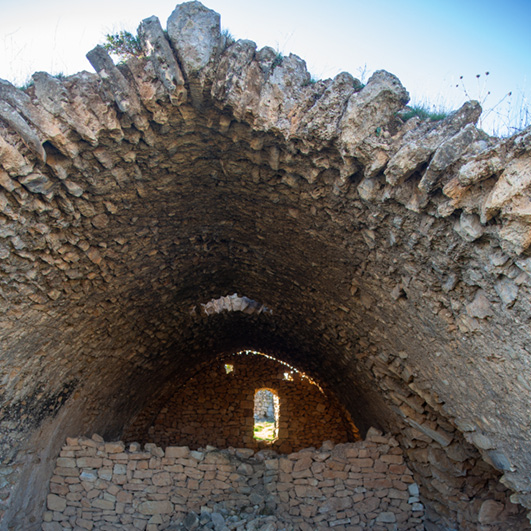 On a hill west of the ancient Jerusalem-Nablus trade road, overlooking the Spring of Robbers (Oyoun al-Haramiyeh), King Baldwin I, king of the crusader state of Jerusalem (1100–1118), built a fortress to protect the road. On an area of around three acres, the crusaders built a military base with rooms, storage warehouses, a church, and a water well, and fortified their fortress with a surrounding wall and defense towers. (Location: 31.985509, 35.244228)

Locals call the fortress Burj Berdawil or Berdawil Tower. Several sources claim that the name comes from King Baldwin of Jerusalem who built fortresses all across his kingdom. In his book, The Holy Land and the Bible (1887), Cunningham Geikie wrote:

“Even at this secluded spot, beside the stronghold on the hill to the right, an old Crusading fortress, known as Baldwin’s Tower, its name derived from that of one of the Latin kings of Jerusalem, crowns the top of a hill, 600 feet above the pass and about a mile to the south; it, and its neighbour to the right, standing as grim sentinels to watch the road from the north in the old troublous times.”

Moreover, Karl Baedeker, in his book Palestine and Syria, Handbook for Travellers (1894), wrote, “To the N. of the town [Yabrud] rises the Kasr Berdawil (Baldwin), a castle with ancient relics. A colonnade on the E. side is half preserved.”

The hill, which rises 810 meters above sea level, gave the crusader army a commanding view of the area. From this strategic location, the tower overlooked the “ill-fated” valley and the main road below, and monitored any danger from the surrounding villages: Yabrud to the south, Silwad and Mazra’a al-Sharqiya to the east and northeast, Jifna, Birzeit, and Ein Sinia to the southwest, and Sinjil to the north.

The site is currently in very bad shape. Few structures remain standing. Arched halls on the southern and eastern sides and some stone walls here and there are struggling to resist the decay of time and weather, and above all, human lust for treasures. No preservation work has ever been done at the site, and one would expect that in a few years, the whole site will be reduced to a pile of rubble that witnesses to a period of long-gone glory.

Take a stroll along the dirt road that starts in the center of Yabrud village, where a big oak tree stands in the middle of the road. Among evergreen olive orchards, fig trees, and grapevines, the road stretches north for a mile, along the top of the hill. The site is open year-round, and visitors will appreciate the refreshing breeze at the top of these hills that are well preserved with symmetrical terraces and clean, well-plowed olive fields. Continue to the north of the fortress and walk among sumac trees scattered in an open field. Aim to visit in October to pick up the delicious sumac spice.