Twenty-six years after signing the Oslo Accord, Palestinians have become disillusioned with it. The present political situation is the worst that Palestinians have experienced since the defeat of 1967, as settlements expand in the West Bank and Jerusalem and settlers have reached a total of about 700,000 (22.5 percent of the population of the West Bank and Jerusalem), and the inhumane and criminal siege on the Gaza Strip has driven 70 percent of the population under the poverty line. Coupled with this is the deteriorating economic and social situation, with an unemployment rate of 27 percent, according to the Palestinian Central Bureau of Statistics (PCBS). (The actual unemployment rate is much higher, but the PCBS records this number because of its limited definition of unemployment.) The area under the Palestinian Authority is one of a few countries that not only adopted a free-market paradigm* but also embedded it into its basic law (which is equivalent to a constitution). This was driven by the belief of top Palestinian Liberation Organization (PLO) officials that it would help attract donor funds to support the establishment of the Palestinian Authority (PA). This indeed happened, as the West Bank, Jerusalem, and Gaza have received around US$50 billion since 1994. Recipients of this aid money include the PA, UNRWA, UN bodies, and international and local NGOs. 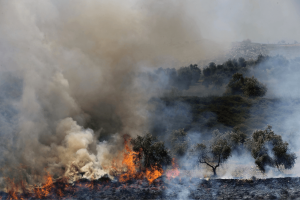 Unfortunately, all this aid has not brought about the promised freedom or economic emancipation for the Palestinian people. Thus, it becomes necessary to think about the policies that the PA has adopted not just in the political sphere (which is often criticized) but also in terms of their economic and social impact. PA policies have led to a deterioration in the living conditions of the majority of Palestinians. Of course, the main reason behind this deterioration is the continued Israeli settler-colonial occupation of Palestine. But the presence of this occupation has not been adequately challenged by official Palestinian policies; on the contrary, the adoption of neoliberal policies by the PA has exacerbated the human and social costs of the Israeli occupation. The focus on private sector–led development has resulted in a concentration of wealth in the hands of a few individuals and monopolistic and oligarchic companies.

In the Palestinian context, there have been many advocates for an economy that fosters sumud (steadfastness), in other words for an economic system that helps Palestinians remain on their lands and not be driven away by Israel’s settler-colonial policies. But although the rhetoric of sumud is widespread even among PA officials, nonetheless, few to no steps have been taken in order to ensure that the requirements for sumud are present and available in reality, an aspect that has to change. A key feature of sumud is the social protection system, which stands on four pillars: health care, decent work, income security, and gender equality.

The pillar of health care is derived from the basic premise that people have the right to health, which includes basic health services that are available to every Palestinian. Countries usually ensure this right through the provision of comprehensive, fair, and mandatory health insurance that provides a solidarity system that allows people to pay according to their income, and some categories of citizens are exempted according to their socioeconomic status. This of course would ensure necessary care for older people, people with disabilities, and children. This kind of system also requires increased government spending in the health sector and legislative reform to restore public confidence in the government health sector.

Decent work includes a number of dimensions such as employment availability, job quality in terms of benefits and working conditions, the availability and enforcement of minimum wage, and equality and indiscrimination based on gender or age or any other aspect in the workplace. In this regard, the PA faces a number of challenges at the legislative and implementation levels, but these challenges can be addressed gradually through a long process of policy reform.

Health care, decent work, income security, and gender equality are the four main pillars of a social protection system. To boost these, the PA must increase spending on the health care system, enact legislation to improve working conditions, increase taxes on the wealthy to be able to support the needy, and adopt legislation such as the family protection law.

As for gender equality, this remains an important pillar for a social protection system, as Palestinian women in the West Bank and Gaza have suffered the most from the patriarchal system coupled with the existence of the Israeli occupation. The situation of Palestinian women needs improvement on all fronts, especially in terms of legislation. Women’s organizations have been advocating for the publication of the Convention on the Elimination of All Forms of Discrimination Against Women (CEDAW) in the official newspaper, the adoption of the family protection law, and the amendment of the penal law as matters of great importance.