Bishara Zoughbi, the eldest son of Issa Zoughbi, was born in Bethlehem in 1863 into a well-known family that provided him with education and care. From an early age, he was given the opportunity to help his father, the town’s mukhtar,*1 accompanying him on social occasions, as was expected according to local customs and traditions. In elementary school, Bishara learned Greek, Russian, and English. As a young man, he farmed his father’s land for a few years before shifting gradually to his father’s main profession: olive wood carving and mother-of-pearl handcraft. Young Bishara soon discovered his passion for art, especially for the engraving of mother-of-pearl, and between 1885 and 1888, he devoted himself entirely to this art. 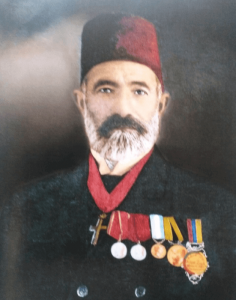 Bishara improved his skills in a relatively short time and became experienced in the design and carving of mother-of-pearl. But his artistic creativity was not limited to specific materials, nor did he wait for customers or authorities, whether local or foreign, to request new products. Bishara worked according to two principles: ars enim artis causa,*2 and creativity has no limits.

His scope of artistic design extended beyond religious emblems. Traditionally, workers of his time focused on religious handicraft products, such as scenes from the life of Jesus or models of churches, such as the Church of the Nativity or the Church of the Holy Sepulchre, and of Islamic traditional holy sites, such as the Dome of the Rock, Al-Aqsa Mosque, and the Ibrahimi Mosque. Bishara recognized the significance of national and historic sites and began to produce pieces with specific patriotic or political themes relevant for notables and customers from other countries. Thus, he created artifacts that showed the official coat of arms of foreign countries and engravings that depicted members of royal families and foreign leaders, engaging in such work until approximately 1922. By that time, Bishara and his brother Yousuf were among the most prominent artists who embraced the creation of large, high-quality works of national and historical themes besides religious artworks.

In 1905, shortly after his father Issa had become ill and could no longer carry out his official duties, Bishara was selected mukhtar of the Farahiyeh clan.*3 Soon thereafter, the town asked him to become mukhtar of mukhtars (prime mukhtar). He was the first and only person in the history of Bethlehem to receive this title. His primary role was to ensure good governance, which included economic and local governmental matters. He was a powerful figure, representing wise leadership in Bethlehem during the early British Mandate rule, officially established by the League of Nations in 1920. Bishara remained one of the most trusted persons to many members of Bethlehem’s city council from the late 1920s until he died in 1934. His leadership extended to the community’s external and internal affairs, and he sagaciously managed the social life of the residents. He was an indispensable leader for Bethlehem’s Muslim and Christian presence and maintained a distinguished friendship with Greek Orthodox patriarchs, among them Damianos I, the Patriarch of Jerusalem, as well as Photius and his successor Meletius II, the patriarchs of Alexandria. His closest relationship was with the patriarch of Antioch, Gregory IV Haddad. 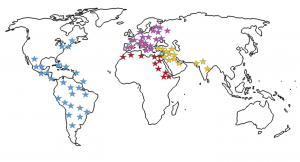 Bishara is well-remembered for defending the rights of Palestinian Arab Christians. Thus, in 1919, he stood up to the British military ruler to prevent him from seizing the Greek Orthodox cemetery adjacent to the Church of the Nativity for the benefit of the Anglican Church and foiled the initiative to establish the National Orthodox Charitable Society as its principal owner. Some families in Bethlehem owned lands that Zionist organizations tried to obtain by forced purchase or via threats. When these families asked the patriarchate to provide protection and put the lands in its custody, Bishara played an important role. The strong networks Bishara had created through artworks dedicated to South American governments were able to help Palestinian immigrants, especially during and after the Nakba of 1948. His numerous works remain on display in many countries today.

The mukhtar of mukhtars and great artist Bishara Issa Zoughbi passed away in 1934. Leaving behind a legacy as a strong, judicious Bethlehemite leader from the early twentieth century, he was determined to engage in cultural and societal agency to fight for the survival of his hometown at the time when armed Zionist gangs began to uproot the Palestinian people from their villages and cities.

*1 Lit., the chosen one; during the Ottoman Empire the head of the local government of a town or village.

*3 In Bethlehem, there are seven major clans, to each of which belong a number of families. The Zoughbi family belongs to the Farahiyeh clan.