Since the outbreak of the COVID-19 pandemic, most of our meetings have been held online, as is the case for many people. The other day, during one of these meetings, an old ecologist friend who lives abroad remarked: “It seems you live in a good and healthy place. I can hear birds singing in the background.” His comment reminded us that we often forget how blessed we are to live in such a rich and diverse spot of the world.

Birds continue to be the most varied group of land vertebrates in our globe, and Palestine has a good share of this wealth due to its distinct location in the heart of the Middle East, as well as at the junction of the three continents of Asia, Africa, and Europe. Furthermore, four different biogeographic zones (Mediterranean, Irano-Turanian, Sudanian penetration, and Saharo Arabian) are packed within a small area that is directly linked to the rich flora and fauna within. Palestine is characterized by various natural habitats that include natural and manmade forests, a desert and coastlines, plains and cliffs, rocky slopes and cultivated fields, and mountains and hills, each accommodating distinctive bird species.

According to our comprehensive survey at Nature Palestine Society, there are 367 bird species that inhabit our surroundings at various times of the year. Around one-third of them breed in Palestine. Breeding birds may stay all year long, such as the chukar, spectacled bulbul, and Palestine sunbird, the national bird, and are usually referred to as “exclusively resident breeders.” Others come only during the spring to breed and raise their chicks, and afterwards migrate by the end of the summer. These are usually identified as “exclusively summer breeders” and include the lesser kestrel, woodchat shrike, and long-eared owl. Finally, there are species that are a mix of both, categorized as “complex breeders,” such as the Spanish sparrow. Around 150 bird species, such as the stonechat, visit Palestine during the winter season to enjoy its mild cold weather. In addition, there are more than 220 species that pay a visit to Palestine twice a year on their epic spring journeys of migration from Africa to Europe, and vice versa during the autumn season. It is worth mentioning that Palestine sits on the second most important migration flyway route, as 500 million birds pass through our skies. Sometimes they stop for a few days or weeks to feed and rest at what we call stopover sites, attracting birdwatchers, birders, scientists, and nature lovers from all over the world during the migration seasons.

The Palestinian environment faces threats that directly affect the habitats, well-being, and diversity of birds.

The Palestinian environment in general faces major threats and challenges that are directly reflected in birds’ habitat, well-being, and diversity. Habitat fragmentation and urban expansion are destroying birds’ nesting sites and foraging territories. The unsustainable use of pesticides and other chemicals in agriculture is poisoning birds and decreasing their numbers tragically. Climate change and its consequences (rising temperature, dryness, and shifting in seasons) affect the annual lifecycle of birds and their ability to nourish and reproduce. Anthropogenic disturbances by wildlife photographers, hikers, and curious individuals constitute a major threat to nesting parents and their chicks. Moreover, bird capturing, nest poaching (eggs and chicks), and hunting habits embedded in our culture exacerbate the war that authorities, civil society organizations, and nature lovers must wage every day.

Much work remains to be done to preserve bird habitats in Palestine.

Numerous conservation efforts are being channeled towards conserving birds in Palestine, all with the support of the Environmental Quality Authority (EQA) and the help of the Environmental Police. The authorities are constantly following up on complaints concerning captured birds that are then inspected by ornithologists, freed when possible, or rehabilitated if needed before setting their wings free.

One of the most exciting and successful efforts was the rehabilitation and freeing of the critically endangered majestic Bonelli’s eagle. The story begins when one of the nature lovers learned about an eagle that had been captured by hunters. Initially, he was not aware of the importance of the bird (currently only two pairs reside in the West Bank), but his sense of duty urged him to approach the Nature Palestine Society. After some negotiations, the hunters agreed to hand over the ill bird. The eagle suffered from dehydration, malnutrition, and broken talons. After months of rehabilitation, a GPS telemetry was installed on the back of the bird for the first time in Palestine. The eagle was freed in Tamoun Nature Reserve during a large event under the auspices of the EQA that included local authorities in the Tubas governorate and community members. The eagle has been free for two years now, flying over 20,000 square kilometers. The eagle seems to like both the east and west banks of the Jordan River (see map that tracks its movement).

A golden eagle, another critically endangered species with only one pair remaining, was handed to the Nature Palestine Society by another responsible environmental activist. This eagle suffered from lead poisoning due to tens of bullets that were shot at him by hunters (see X-ray image). The long rehabilitation process was successful, and the eagle was freed back into nature, carrying our hopes and wishes that it would soon find its spouse.

In 2020, the Nature Palestine Society succeeded in rehabilitating and freeing 50 different bird species, an effort that would not have been possible without the close cooperation and coordination between the EQA, the Environmental Police, local authorities, nature lovers, and our amazing volunteers. The journey has started, and we are proud of our achievements. But achievements must always be accompanied by responsibilities. Nature Palestine Society has a mission to maintain and sustain.

Conservation efforts are direly needed, as 35 percent of bird species in Palestine are in the red zone of threat or near extinction.

Despite all the conservation efforts, more needs to be done. Authorities, civil society, stakeholders, and every member of the Palestinian family must work hand in hand to maintain bird habitats and natural areas. Development is unavoidable but must be done in a sustainable way to minimize harm to nature and its components. There is still room for more research to better evaluate the status and distribution of bird species in Palestine. Additional public awareness campaigns need to take place in order to educate the community about the importance of birds to our environment and health. Stakeholders must engage society in their conservation efforts and activities to encourage a sense of responsibility, especially among the younger generations. The governing environmental law in Palestine should be revised, modified, and updated to be able to address current environmental challenges and to comply with signed international conventions and treaties. The revised environmental law should contain deterrent penalties against nature crimes and outline reinforcement mechanisms. Finally, the establishment of a well-equipped national bird rehabilitation center must be the ultimate goal among all players in Palestine’s environmental sector. 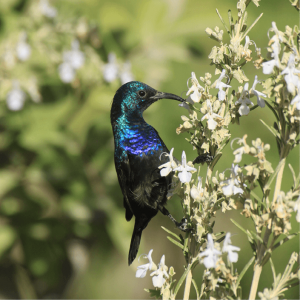 The Palestine sunbird is the Palestinian national bird. It is a small Nectariniidae bird that feeds mainly on flower nectar, but during the breeding season it feeds the fledglings on small insects. The plumage of breeding males is mostly black but appears a glossy mixture of blue and green in the light. 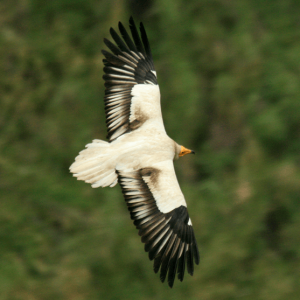 The Egyptian vulture is a medium-sized scavenger raptor that used to breed in Palestine until 2007. It is one of the Old World vultures and the only member of the genus Neophron. The adult bird is recognized by its white plumage with black flight feathers in the wings, while those that are immature can be recognized by their dark brown color. The vulture can be seen in small numbers during migration seasons. 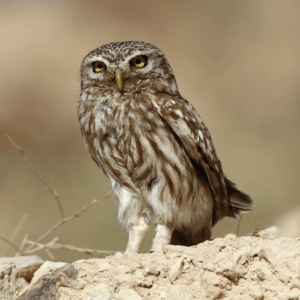 The little owl is a member of the typical or true owl family Strigidae. It is a small species, cryptically colored for camouflage and mainly nocturnal, but it can be seen during the daylight standing on a rock or a short tree. It usually feeds on insects, earthworms, other invertebrates, and small vertebrates such as rodents. 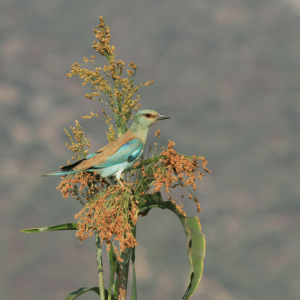 The European roller is the only member of the roller family of birds to breed in Palestine, and the number of breeding pairs is decreasing at an alarming rate. The bird is mainly blue with an orange-brown back. It is usually seen perching prominently on trees, poles, or overhead wires, watching for the large insects, small reptiles, and rodents that they eat. 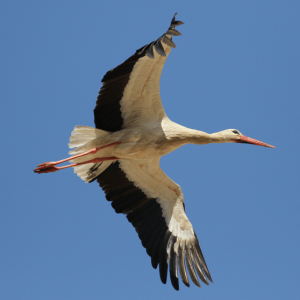 The white stork is a large bird in the Ciconiidae family. It is characterized by its mainly white plumage, black feathers on the bird’s wings, long red legs and long pointed red beak in adult birds, and long neck. It passes over Palestine in large flocks twice a year during the spring and autumn migration seasons. This migratory species spends between a few days and a few weeks at stopover sites to feed and rest in Palestine. 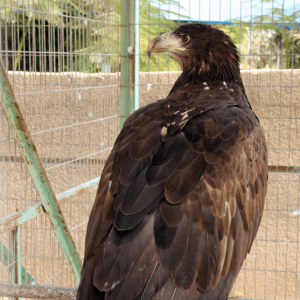 The golden eagle is the largest true bird of prey that breeds in Palestine and belongs to the family Accipitridae. The adults are dark brown in color, with lighter golden-brown plumage on their crowns and napes that gives the species its common name. These birds have powerful feet and massive, sharp talons to snatch up a variety of prey. 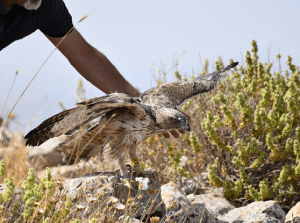 A pair of common kestrels being freed after they had been confiscated by the EQA and the Environmental Police and rehabilitated by the team of Nature Palestine Society on the hills of Wadi Fasayel Nature Reserve.