The town of Bethlehem enjoys international fame as the birthplace of Jesus Christ, only a humble village more than 2,000 years ago. Pilgrims began to come to Bethlehem beginning in the fourth century and returned to their countries filled with stories about the Holy Land. In the late nineteenth century, residents began to leave Bethlehem to move to other countries. Most of these immigrants have been faithful representatives and spokespersons who have spread knowledge of Bethlehem’s history and holy places as well as the distinctive culture that reflects the traditional Bethlehemite way of life. 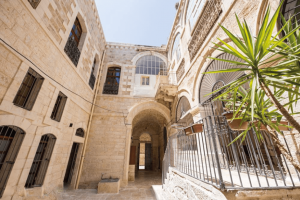 In Chile, there is a significant Palestinian community. After four generations of emigration from the Bethlehem area, including the cities of Bethlehem, Beit Jala, and Beit Sahour, there are approximately 500,000 Chilean citizens of Palestinian origin. Alberto Kassis Sabag was born in Santiago, Chile in 1938, into a Palestinian family that had initially migrated to Bolivia and then moved to Chile in the 1930s.

In 1986, the Kassis Sabag family traveled to Palestine to visit the house their ancestors had left when they emigrated from Bethlehem. Alberto’s brother Miguel was overwhelmed with emotion and brought back to Chile a piece of wood from the main door of his Palestinian house. This piece of history remained with Miguel until the day he entered his eternal rest.


In the year 2000, Alberto traveled to Palestine together with José Said, one of his close friends of Palestinian descent, during the Great Jubilee celebrated by Pope John Paul II in Bethlehem. The special moment they experienced filled them with optimism and deep emotion and inspired them to create the Bethlehem 2000 Foundation in Chile. This foundation has become a constant source of help for needy children and families in Palestine, and since its creation, it has never ceased to extend its support.

In 2020, after the death of José Said, the foundation’s superior council unanimously appointed Alberto as the new president. He presides over the foundation’s proceedings and takes great pride and joy in the work they accomplish.


Alberto has never forgotten his beloved Palestine. Inspired by many stories of help from members of the community of his origin, he embarked on a path that he has never strayed from and has engaged in work that has never stopped. He and his wife, Anita Sabag, have always wanted to contribute to supporting their beloved Palestine and spreading knowledge about its history throughout the world. Living in the diaspora entails maintaining traditions, engaging in education, and preserving and promoting the values that have been passed down from generation to generation. Alberto and his family have become an inspiration and example for many Palestinians in Chile and around the world.

In 2018, the Kassis family began to support their beloved Palestine through a project initiated by George Al Ama in cooperation with the Center for the Preservation of Cultural Heritage (CCHP): Dar Al Sabagh Center, a research and studies center that targets the Palestinian diaspora in particular. Located in the home of the Kassis Sabag family, the center has received encouragement and support from the family’s descendants who now live in the diaspora in Chile. During a period of only a few years, the center has become a welcoming space that brings together Palestinians from all over the world. Its existence has managed to cross borders, fulfilling objectives never before imagined, and it is expected that Dar Al Sabagh Center will continue for years to come to remind diaspora Palestinians of the origins of their ancestors. It constitutes a precious asset in the history of each diaspora Palestinian and is a site frequented and appreciated by tourists who visit Bethlehem to learn more about Palestinian heritage and arts.

Dar Al Sabagh has facilitated more than 300 hundred investigations regarding families who have lived and/or still live in Bethlehem, helping Palestinians living in the diaspora to learn more about their roots. The center has also established a meaningful network that helps connect Palestinians with each other. Dar Al Sabagh has become a hub for culture and the arts through the inclusion of over 90 works of art offered by George Al Ama. It has organized cultural events with the aim of highlighting the richness of Palestinian cultural heritage and organized an informative tour in which Palestinians living in the diaspora were able to explore the historic cities of Bethlehem, Beit Jala, and Beit Sahour, illustrating their cultural heritage sites and rich history.


In 2019, Alberto purchased the second part of Dar Al Sabagh. His goal was to restore the building and adopt it for use as a boutique guesthouse. The project began in February 2021 and is expected to be completed by the summer of 2022.

This Christmas, Dar Al Sabagh organized a three-day event as part of the activities of the Christmas Market managed by the Municipality of Bethlehem. The activities offered included a night of poetry, a monodrama performance, a Christmas stand, and a Christmas reception organized by H.E. Mr. Christian Hodges-Nugent, the ambassador of Chile to the State of Palestine. A video about Club Deportivo Palestino, the successful Palestinian soccer club in Santiago, was played for the attendees.


Participants in these activities have appreciated the inspiring support extended by the Kassis Sabag family that realized the dream of a man with a vision and has resulted in the spread of his message of love, dedication, and hope. Alberto, his wife Anita Sabag, their two daughters Ana Elizabeth and Soraya, along with their six grandchildren, are committed to continuing the legacy of preserving history and keeping the diaspora alive and active in Chile and throughout the world.