A Multimedia Exhibition on Tour through Italian and Other European Cities

Following unprecedented renovations that lasted almost ten years, the Basilica of the Nativity in Bethlehem has been restored to its original beauty. A symbol of humanity has been given back to the faithful all over the world and to today’s pilgrims who follow in the footsteps of the women and men who over the centuries have venerated the birthplace of Jesus.

It all started on December 6, 2019, at the Vatican Museum during an event organized by the Embassy of the State of Palestine to the Holy See. H.E. Ambassador Issa Kassissieh presented the results of the rehabilitation works of the Church of the Nativity and its new refurbishments in the presence of the Secretary of State of the Holy See H.E. Cardinal Pietro Parolin and Italian and Palestinian dignitaries, along with the official ambassadors to the Holy See.

Through the discoveries of new archaeological excavations and complex restoration works, this exhibition tells the story of renewed devotion – from the time of the first Christians who venerated a simple grotto to the age of the Byzantine emperors who built one of the most magnificent basilicas of antiquity that later on was fortified and lavishly decorated by the knights who founded the Crusader Kingdom of Jerusalem. Exhibits extend to the present day and show the long period of neglect and deterioration that had seriously jeopardized the ancient structure until the Palestinian Presidential Committee for the Restoration of the Nativity Church, with the support of the international community, forged a historic agreement. Thus, amid sensitive social, political, and diplomatic conditions, considerable financial and professional resources were committed to managing a restoration project that harmonizes the requests of the three religious communities, the Greek Orthodox, the Franciscan and the Armenian.

By documenting restoration work and archaeological excavations, the exhibition constructs a broader and deeper story that embraces the entire space of the basilica from the system of grottos to the roof, showing its development from the oldest periods up to the present day. Bethlehem Reborn tells a story that goes beyond the history of politics and art to reveal, through the voices and accounts of pilgrims, the story of religious pilgrimage. It includes the various rituals, prayers, and voyages of the faithful who have visited the basilica throughout the centuries. This rich history accompanies the visitors of today, helping them rediscover themselves as pilgrims through a soul-searching journey.

Bethlehem Reborn invites all to discover the wonders of the Basilica of the Nativity in anticipation of a journey to Bethlehem and Palestine, the birthplace of Christianity.

Bethlehem Reborn, initiated and fully supported by the Embassy of the State of Palestine to the Holy See, aims to promote and make known to the world the restored face of a country, a place given back to the world and to the Christian communities of Bethlehem and Palestine, the Holy Land. It provides an experience of knowledge and spirituality, destined to change the concept of renovation and peace, giving rise to a river of emotions similar to the stream of the pilgrims who come from all over the world every day to pass through the small Door of Humility, bowing in reverence to the divine presence in the midst of the basilica’s beauty.

Through its five areas/sections, the exhibition uses the nearly completed restoration project as a thread that stitches together the even greater history of the oldest monument in Christendom.

1. The PLACE OF THE star – From the Grotto to the Basilica

The first section is dedicated to the Constantinian-era basilica and the Grotto of the Nativity. The narration of the creation of the first church – built on the birthplace of Jesus – starts from the archaeological excavations and the restoration of the floor mosaics.

The recent renovation works brought to light wider segments of the mosaic decorations in all their splendor, whereas the new archaeological excavations gave a richer insight into the circumstances of the church’s construction at the beginning of the fourth century. 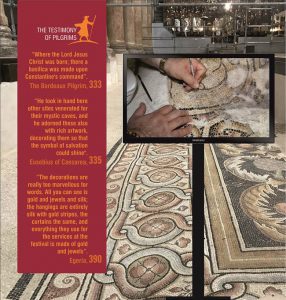 2. THE SPLENDOR OF THE HEAVENS – Justinian’s Basilica

At the center of the second section is the superb three-apse building that was erected at the end of the sixth century by Emperor Justinian and that today remains more or less unchanged. Among the discoveries of the new archaeological works, there is one linked to a veritable “ritual of the light”: fragile glass lanterns that lit up the old basilica were discovered in a corner between the demolished façade and the new colonnade. Other findings include the magnificent colors of the Constantinian-era fresco and the baptismal font that contained a finely sculpted capital that was used as an additional font.

3. A FORTRESS OF LIGHT – The Transformations of the Crusades (twelfth century)

The third section guides visitors through the transformations of the basilica during the Crusades. Among the most significant modifications are the construction of the fortress to welcome new waves of pilgrims from the West, the decoration of the majority of the nave columns, and the complete remaking of the mosaic decoration that illuminates the upper walls of the basilica with its gold, nacre, and glass tiles.

Although only 130 square meters survive from the alleged 2,000 square meters of the original wall mosaic, their beauty is enough to demonstrate the deep reverence shown to this basilica during the Middle Ages by the people of the prosperous city of Bethlehem. 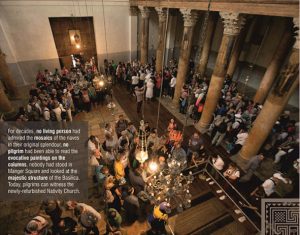 4. THE DARK CENTURIES – The Downfall of the Basilica

The fourth section explores the long phase of decline which started during the ninth century and overshadowed the magnificence of the Church of the Nativity.

The chronicles of pilgrims recount how the marble covering had been taken away, the wall mosaics had started to crumble, and the condition of the roof had become precarious. This critical situation mirrored the religious tensions that, in 1852, led to the creation of the Status Quo: a decree issued by the Sultan of Constantinople that meticulously regulated the modalities, rituals, and jurisdictions of the three religious congregations that have since managed the church as part of this decree – the Greek Orthodox, Franciscan, and Armenian churches.

The fifth section gives space to the rebirth of the basilica, a literal rebirth thanks to the complex renovations that were started in 2013 by the Italian company Piacenti SpA Piacenti SpA contracted by the Palestinian Presidential Committee for the Restoration of the Nativity Church.

An experience of profound knowledge and spirituality was bound to change the concept of restoration, as a millenarian history of devotion has changed and will continue to change the destiny of Bethlehem and of Palestine. 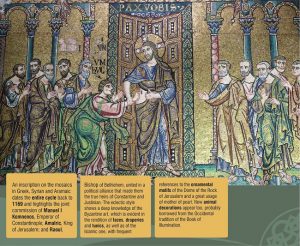 As the town of the nativity, Bethlehem is one of the unique heritage and cultural cities of the world and a must-see destination for millions of pilgrims, tourists, and visitors.

Against all the odds, the first Bethlehem Reborn multimedia exhibition took place from August 18 to 23, 2020, at the Congress Palace in Rimini (Italy), where more than 5,000 people visited the 250 square meters of dedicated space that included 32 large panels, 5 videos, and a documentary film. More than 25,000 people joined the virtual tour (available at

Bethlehem Reborn aims to reinvigorate and support the local communities who are the natural, legitimate, and rightful custodians of this spiritually significant place. 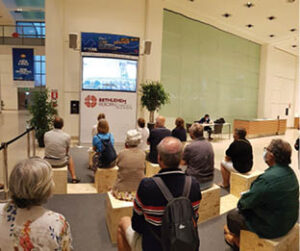 https://www.meetingrimini.org/edizione-2020/mostre/bethlehem-reborn-le-meraviglie-della-nativita/), and more than 5,000 individuals participated in the webinars.

A short documentary can be found at https://www.youtube.com/watch?v=TXQy_1a2S9c&t=157s.

The exhibition will tour various Italian and other European cities in 2021 to keep the basilica in the hearts and minds of the faithful until COVID-19 is defeated and they may return to pray and practice their religious rituals in Bethlehem. 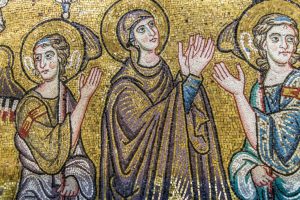 Bethlehem Reborn is promoted by

In collaboration with Piacenti SpA.

Special thanks to Father Ibrahim Faltas