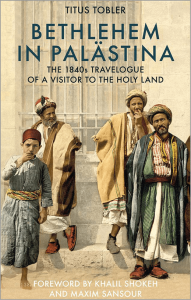 Bethlehem in Palästina is a fascinating account by a young Swiss doctor who explored the famous town of Bethlehem, the place of Jesus Christ’s birth, more than 170 years ago. It is an essential research document for Palestine studies that has been available only in German until now.

In 1835, 27-year-old Swiss doctor Titus Tobler traveled to Palestine to undertake medical research. The trip sparked a lifelong fascination with the Holy Land, and over the course of four visits to the area, Tobler wrote several extensive geographical studies and travelogues on Palestine. He eventually became a prominent authority on Palestine studies in Europe and used this platform to enter politics. On his second journey to Palestine, Tobler spent considerable time in Bethlehem and decided that the city of Christ’s birth, which had so often been studied as a mere environ to Jerusalem, deserved its own detailed publication.

The book, published in German in 1849, delivers a fascinating and meticulous insight into the historic small town in the critical few years before global events changed it forever and opened it up to the world. It details all aspects of the inhabitants’ lives, including access to water, agricultural practices, cooking traditions, dress, hygiene, family dynamics, attitudes towards one another and towards foreigners, economics, professions, and, most significantly, the growing trade of making and shipping souvenirs abroad. Some of Tobler’s most interesting observations describe the long-term feuds between different Christian denominations in the town, which, along with similar rivalries in Jerusalem, would be used as a pretext for the Crimean War just four years after the publication of his book.

The book’s most impressive sections, however, and probably the most valuable for researchers, are to be found in Tobler’s comprehensive survey of the Church of the Nativity, to which he dedicates more than half the book. Tobler delivers a detailed account that includes the measurements of every room, column, and mosaic. For key items, such as the Grotto of the Nativity and the nativity crib, Tobler documents each item’s mention in all historical literature that was available to him, tracking the changing accounts or assumptions about that item from Jesus Christ’s birth until the mid-1800s.

As insightful as Tobler’s accounts are, the book is possibly more interesting for what it says about Tobler himself and his frequently unfiltered European perspectives, that, despite Tobler’s repeated claims to the contrary, are anything but neutral. Moreover, Tobler’s research seems to have been undertaken with limited conversations with local residents. An accomplished linguist, Tobler was quite comfortable with conversing and referencing texts in German, Greek, Latin, French, and English; however, he did not speak Arabic and only seldom refers to facts obtained directly from the locals. Instead, his research is largely based on his own observations, conversations with other Europeans in town, and historical texts. As the actual residents of Bethlehem have no voice in his book and limited agency in the events around them, we learn very little about the perspectives of Bethlehemites towards their Ottoman rulers and the various foreign institutions in town. This critique of Tobler’s work is, of course, not unique to Tobler, as the travelogues of many of his contemporaries have also been called into question in modern times for their bias, undeclared motivations, and an inclination to depict Palestine as a primitive place waiting to be redeemed by Europeans. Some historians consider Tobler even slightly more positive than others regarding his observations of the locals, as he at least mentions that Bethlehemites were hardworking and that he had become fond of some of them and enjoyed their company. 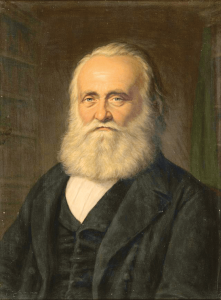 Despite the book’s historical importance and essential value to Palestine studies, it remained until recently available in German only. This new translation into English renews its significance as a crucial source for those who wish to understand Palestine and the evolution of European attitudes towards it.