Beit Felasteen (House of Palestine) on Mount Gerizim, south of Nablus, rises like a balcony over the ancient city that sprawls between and along the sides of the two mountains Ebal and Gerizim, the latter known as a holy mountain. The house was built during the second Intifada at the location where Bir al-Hamam, a Byzantine monastery dating back to the fifth century AD, was unearthed during the construction work. The monastery of Bir al-Hamam is well-kept with its magnificent mosaic, structures, and findings in the basement of the house. Two rooms of a museum were built to showcase the findings in situ. (Location: 32.210102° N, 35.265194° E.) 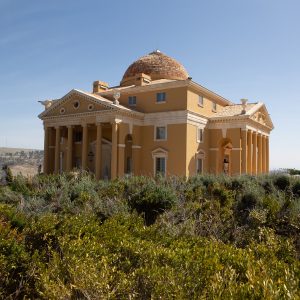 Wide, broad stairs lead to the house’s four matching sides, which all lead to the main rotunda, named by Mr. Masri the Dome of Mercy. The name Allah and those of the four prophets Abraham, Moses, Jesus, and Muhammad are written on its sides in golden Arabic calligraphy. A marble statue of Hercules stands under the dome as a symbol of strength and steadfastness.

The house’s four wings are named after Palestinian cities: The Jerusalem-al-Khalil (Hebron) wing contains the study that houses more than 5,000 books and manuscripts, among them invaluable collectibles, as well as a two-meter-long ancient camera and a fossil shell that dates back millions of years. In the Nablus-Jenin wing stands a bronze statue of al-Buraq, the winged horse of Prophet Muhammad. The Haifa-Jaffa wing houses a gilded throne that belonged to Khedive Ismail Pasha (1830–1895) and a rare Picasso painting. The fourth wing, the Bethlehem-Nazareth section, is filled with rare wall paintings and frescoes.

Mr. Masri proudly leads visitors to the memory section, housed in another wing, that tells the story of Palestine and the Palestinian people. Murals cover the walls from floor to ceiling. They recount the Nakba and the mass expulsion of Palestinians and depict the Palestinian leaders who have written the recent history of the ongoing struggle. On the opposite side, a map of historic Palestine is illuminated in full color, surrounded by the names of the 530 Palestinian villages and towns destroyed during the Nakba.

Beit Felasteen lies in the middle of a 300-dunum garden (74 acres) that is planted with more than 8,000 olive trees. The southern front faces a wide round fountain with sculpted horses in its center. The historic glass house nearby belonged to Napoleon III and was brought by Masri from Paris. The elegant gardens were designed by the famous French architect Louis Benech.

“Beit Felasteen is not only a family house,” says Masri, “it belongs to all Palestinians and visitors.” Newlywed couples come to take photos in its beautiful, spacious gardens, and Masri holds important political meetings and events here. At the northwestern end, outside the surrounding walls, Masri built a grand mosque that overlooks the ancient city center of Nablus. 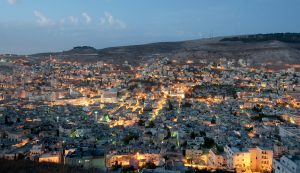 Palestine in the Nineteenth Century