East of Kufr Aqab, eight kilometers north of Jerusalem, there is a cluster of Ottoman-era buildings that have recently been renovated by Riwaq Centre for Architectural Conservation. One of these historic buildings, Hosh Dar Barakat, has been rented by Dalia Association and opened under the name Beit Al Karmeh (lit. House of Grapes). It houses a community kitchen named qout (lit. nourishment), meeting rooms, a library, a co-working space, and two guest rooms. An expansive open-air courtyard welcomes visitors – inviting them to reminisce about how their ancestors lived – and hosts community events. The typical two-level peasant house with cross-vaulted rooms has a long outdoor staircase that leads to a balcony from which you reach a well-lit spacious meeting room. Adjacent is a room with an open ceiling that leads to the library. 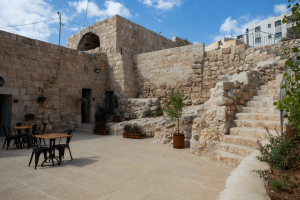 Six months ago, two young women took the initiative to open a community kitchen that serves people in the neighborhood and caters for center events. When I visited in late October, Abrar, 29, and Samia, 25, were busy preparing local dishes. Behind qout kitchen’s large arched window, Abrar was rolling dawali, a most fragrant and aromatic dish of grape leaves wrapped around rice. The two women’s dawali were prepared with a secret spice that enhanced the savory flavor of the filling. This is one of the most famous Palestinian meals and the dish that their customers most often request. Other specialty dishes of qout kitchen include musakhan, a popular Palestinian creation of chicken and caramelized onions served on top of oil-drenched flatbread and sprinkled with lemony sumac and roasted pine nuts. Equally well-liked is mansaf, a dish of rice and lamb served on thin bread and covered with a generous serving of a yogurt sauce prepared from jameed (dried yogurt), which gives it a poignant taste.

The Rock, a narrow cross-vaulted room named after a large natural rock in its wall, serves as a meeting space with eight seats. Two other rooms are used as a guesthouse: Majdal with a single bed and Bisan with a double bed. All rooms are floored with traditional ornamental tiles. With their modern furniture and lively colors, they fuse the past with the present. 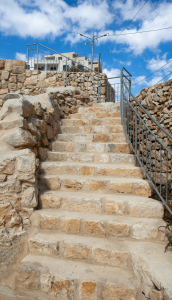 Al-eliyeh (lit. the attic) is a large spacious room with a wide balcony that overlooks the main street and the picturesque eastern hills. Equipped with modern furniture and the technology required to hold meetings, it even has a kitchenette. The library is yet to be populated with books but used already for community events – and welcomes book donations.

Beit Al Karmeh (GPS: 31.880185, 35.226220) is located to the east of Kufr Aqab and can be reached via the back road that comes from Al-Bireh’s Sateh Marhaba quarter. Alternatively, follow the main road that leads from Ramallah to Jerusalem, turn left at the old military camp, go uphill and eastward across Kufr Aqab until you reach the end of the road, then turn left towards the old town of Kufr Aqab. For more information, contact Aya Badaha of Dalia Association via mobile at 059-577-0676 or per email at saha@dalia.ps; contact Abrar of qout kitchen per mobile and WhatsApp at 056-929-2988 or via Instagram @qoutkitchen.