Young Palestinian Women Sing for Their City and Freedom

Banat al-Quds, Arabic for Daughters of Jerusalem, is an eight-year-old ensemble at the Edward Said National Conservatory of Music in Palestine (ESNCM) that comprises 35 young women who are 13 to 26 years old. The ensemble consists of a three-part choir and an instrumental ensemble. Because Arabic music has been mostly a male-dominated art form, it was a breath of fresh air to see young Palestinian women emerge and excel in the performance of Arabic music at the ESNCM’s Jerusalem headquarters. The ensemble has performed in many places, locally and internationally, singing for the freedom of their city Jerusalem and for the freedom and justice of all Palestine; they sing and perform the stories of the Palestinian people. 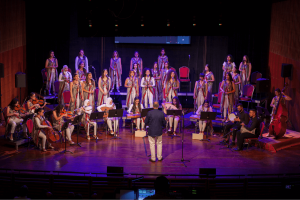 In 2021, Banat al-Quds contributed a song to the album Henna (Young Female Voices from Palestine) that topped the list of the Transglobal World Music Chart (TWMC) as the best album for the month of August 2021, ranking first among dozens of albums in the world music category. One of their songs on the album was “Gaza.” It reached the top 20 on Europe’s world music chart, a monthly selection of the best new music releases, curated by the top 45 DJs from across the world.

Among the ensemble’s many other achievements that have come as a result of its members’ dedicated engagement include winning first place as the “best regional choir” in the Choir of the Year Competition organized by the Choir Festival 2016, held in Dubai.

Banat al-Quds was established by the ESNCM in line with its long-standing dedication and commitment to professional music education, defying all social and political challenges since its inception in 1993. When it comes to music, the general perception within society limits women to solo vocal performances. The conservatory, however, takes a different approach, supporting young talented women and encouraging them to participate in all fields of music. It thereby aspires to create a positive change in the minds of audiences, change attitudes towards women and their artistic expression, and encourage women’s cultural participation. 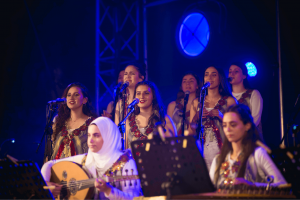 The young women who form Banat al-Quds have found an enabling environment at the conservatory, and their training is built on a strong music education foundation, which has encouraged them to excel in music and form the first all-female ensemble and choir in Palestine that is unique also at the regional level. The ensemble performs Arabic songs and music from Palestine and the Arab world. The songs it presents are unique, mainly depicting the young women’s lives in Jerusalem under occupation.

In May 2017, Banat al-Quds released three videos on YouTube in solidarity with the Palestinian prisoners’ hunger strike. The end of 2018 saw the release of the group’s first album in the city of Oslo, where they performed the songs of a Jerusalem-themed CD that they had released. Despite their difficult living circumstances, the girls’ songs are full of hope, resilience, and steadfastness and express their aspiration for freedom and their joy in life.