This review includes excerpts from reviews in The New York Times (Christopher Benfey) and The Guardian (Robin Yassin-Kassab).

Time was a treacherous distance, and it would not be crossed but through the dangerous substitutions of the imagination,” Isabella Hammad, a London-born author still in her twenties, writes in her dazzling debut novel. The Parisian follows the adventures of Midhat Kamal, a motherless young man since the age of two and the son of a wealthy textile merchant, as he heads to Montpellier in France to study medicine in 1914.

In Montpellier, Midhat is hosted by Frédéric Molineu, a widowed professor of anthropology. Frédéric’s daughter, Jeannette, becomes the object of Midhat’s romantic longings, their intimacy nurtured by the shared ache of lost mothers. However, the hospitality Frédéric showed Midhat was merely a cover, as Frédéric has taken him into his house as a sort of human guinea pig to see how a young Muslim might assimilate to European civilization. 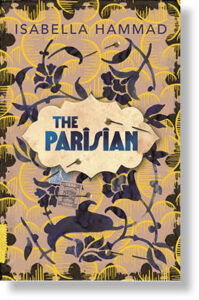 Shattered by this betrayal, Midhat leaves the Molineu home and heads to the Sorbonne in Paris to study history where he assumes, as a defensive social armor, the style and habits of Parisians.

Eventually, he returns to Nablus where he courts Fatima Hammad, and their life plays out against escalating civil unrest following the British assertion of control over Palestine.

By the eruption of the 1936 uprising, Midhat must undergo a painful ripening, a final reckoning with the past. Like Palestine itself, Midhat remains divided. “I belong here,” he writes Jeannette from Paris, “as much as I belong in Palestine.” In Paris he had acquired the art of disguise, “learning to dissemble and pass between spheres and to accommodate, morally, that dissemblance through an understanding of his own impermanence in each.” In Nablus, he finds himself playing another role, that of a merchant like his father, “the inverse of his persona in Paris.” And this excruciating double fate – “He was two men” – ultimately becomes psychologically unbearable.