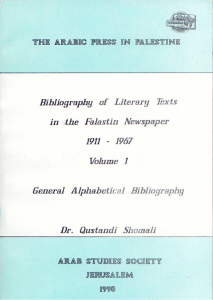 I have published six volumes of biographical information on cultural material collected from four main Palestinian newspapers: Falastine (1911–1967), Mir’at Al-Sharq (1919–1939), Al-Carmel (1908–1942), and Al-Akhbar (1909–1947). The work was researched at Bethlehem University during the period 1984–1986, at the Library of Congress in Washington in 1987, and during the summers of 1988 and 1989 at the Staatsbibliothek in Berlin, the British Museum Library in London, and the Bibliothèque Nationale in Paris. The Arab Studies Society in Jerusalem published these six volumes. Three volumes, which total 1,500 pages, list the material in Falastine newspaper, published by Issa Daoud Al-Issa in Jaffa and considered the most important and longest-running paper in Palestine. It played a leading role in awakening the national consciousness and was able to reflect the evolution of cultural and literary life in Palestine for 56 years. The newspaper’s founder, Al-Issa, was one of the most outspoken critics of Zionism and British occupation. I was able to collect around 15,000 texts from the newspaper with all the bibliographical data and classified them according to author, title, genre, and date. 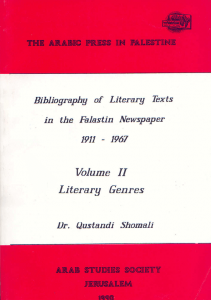 The first volume is a general alphabetical bibliography. It includes the works of 1,166 authors with 8,560 titles. It also includes a chapter on the development of the Palestinian Arabic press from 1876 to 1990 and a chapter on the development of the newspaper Falastine. This volume also includes examples of the newspaper from various periods, and tables and graphics that show the number, genre, and volumes of texts in each year. 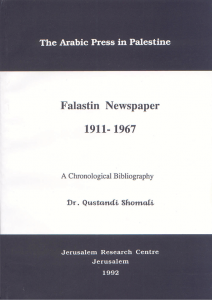 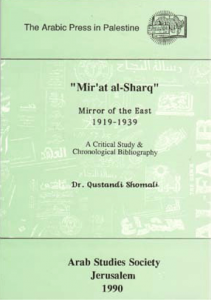 The third volume includes all the material published in the newspaper in chronological order, with a critical study of Falastine newspaper. The material was collected from 115 microfilms, each containing 400–800 pages, and sorted by computer into three different bibliographies. The attempt to compile a bibliography of this size is a challenging task. It was necessary to complete the research to crossmatch three copies of microfilms. The first is available at Bethlehem University and was microfilmed by the Inter Documentation Company in Switzerland from the copies available at the Jewish National Library in Jerusalem, the second at the US Library of Congress, and the third at La Bibliothèque National-Annexe de Versailles in Paris. 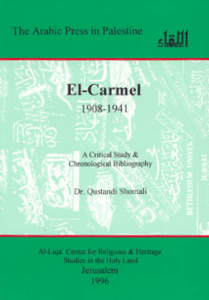 The fourth bibliography pertains to Mir’at Ash-Sharq (The Mirror of the East) newspaper. Its microfilms were available at the British Museum Library. It was the first Arabic weekly newspaper published in Jerusalem after World War I. It was published by Bolus Shehadeh. In its first years, the newspaper was issued in both Arabic and English, but eventually it became an exclusively Arabic publication. Although it was known especially for the thorough political analyses in its editorials, the paper also published analytical articles that covered all aspects of life. 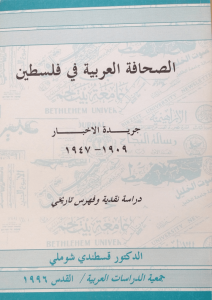 The fifth volume covers Al-Akhbar newspaper that was published by Bandali Ghourabi from 1909 until 1947. It also published analytical articles that covered all aspects of life.

These bibliographies are an immense contribution to cultural and political life. They make available to scholars a rich collection of texts and provide an authentic record of immense value to historians, politicians, journalists, scholars, students, and all those interested in the history and literature of Palestine.

The sixth volume was linked to Al-Carmel newspaper, published by Najib Nassar. This newspaper was one of the first and most important Arabic newspapers in the Ottoman period. The first issue appeared in 1908. In its initial stages, with Najib Nassar as its publisher and editor-in-chief, it had to operate under very unfavorable conditions, as the Ottomans suppressed Palestinian nationalist press. While Al-Carmel was known for the thorough analyses given in its editorials, it also published analytical articles that covered all aspects of life. Al-Carmel founder, Nassar, was considered the father of nationalist journalism in Palestine and in 1908 was among the first journalists to foresee the danger of the Zionist movement to the Palestinians. 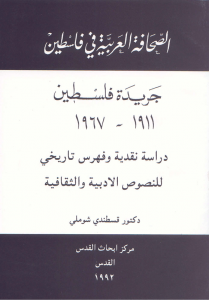 In tracing the development of the Palestinian press before the Nakba, we witness that, on the one hand, it was shaped by a multitude of internal factors that included the ongoing political, social, economic, and national changes. But on the other hand, it defied the hardships of geographical and cultural isolation, censorship, lack of freedom, and national oppression and was an important vehicle of the Palestinian nationalist spirit. Thus, it was not only a medium that informed about the latest political developments, highlighted Palestinian identity, and played a leading role in awakening the national consciousness of the masses, it also documented and influenced the development of a rich and diverse literary and cultural life in Palestine.