Desmond Mpilo Tutu was born in 1931 to a poor black South African family in the city of Klerksdorp, one of the first Dutch settlements in that area. Living in the black residential area of town, Desmond grew up in the de facto segregated reality of Apartheid South Africa. However, it wasn’t until 1948 that apartheid became de jure the official policy in South Africa. That same year, the State of Israel was established, causing the Palestinian Nakba: a catastrophic year for both Palestinians and South African blacks. Both countries, South Africa and Israel, are products of European colonial history, as the Dutch and the British created segregated policies that are based on race and ethnicity in South Africa and on religion in Palestine, respectively. 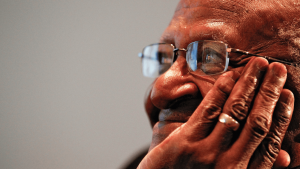 Yet, while neither entity was a classical neocolonial entity, both are clear cases of settler colonial states. The main feature that distinguishes settler colonialism from classical or neocolonialism is the fact that settler colonialists come to settle in an occupied land permanently, exercising state sovereignty and juridical control over the indigenous land, while ultimately aiming to eliminate the native people. The natives become extraneous while the settlers are casts as natives. Thus, settler colonialism develops different mechanisms, ideological constructs, and social narratives that underline their racial, ethnic, and social supremacy. The indigenous land is described as terra nullius, empty or barren land that is just waiting to be “discovered,” thus becoming the private property of the settlers. The native people are depicted with racist constructs as savage, violent, and dangerous while the settlers are portrayed as the chosen people, the civilized, and brave pioneers. To defend the settled property from the savages, a policing state is created and given extraordinary power over the native people, including power over their civil affairs. In all settler colonial projects, the Bible is utilized to sugarcoat the settler colonial policies and practices.

It is in such a context that Desmond grew up as a black and poor South African under a system of segregation. As a Christian boy, he saw that the church in South Africa was no better but rather kept people apart according to the color of their skin, making the Sunday service hour the most segregated hour of the week. Later on, as a trained black teacher, he protested the Bantu (Black) Education Act of 1953 that enforced segregation in the educational system, confining blacks to an education that would keep them as cheap laborers. By the mid-1950s, Tutu went to seminary to study theology, and he was ordained in 1960 as an Anglican priest. The era of the sixties and seventies saw the manifestation of the brutal oppression carried out by the white apartheid regime in South Africa and the rise of the anti-apartheid movement. This had to have its effect on Tutu who became interested in black theology and involved in the anti-apartheid struggle of his people.

Within two decades, Tutu became an international icon for the anti-apartheid struggle, a beacon for the quest for liberation from oppression, and an unwavering voice for justice, which earned him the Nobel Peace Prize in 1984. A year later, Tutu was elected as the first Anglican bishop of Johannesburg and soon after that as the first black archbishop of Cape Town. 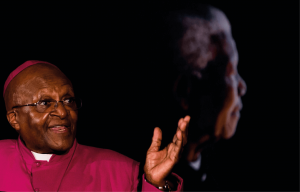 During the year that Tutu was ordained bishop of Johannesburg, a group of South African theologians issued a theological manifesto that became known as the Kairos South Africa Document. For Archbishop Tutu it was clear that the apartheid ideology had to be fought not only on the streets of South Africa, and not only in international forums, but also in the theological arena. The Kairos South Africa Document identified three different forms of theologies that are at work in the South African context. It labelled the first as State Theology, the theology of the white establishment in South Africa that gave the theological reasoning behind the apartheid ideology. White supremacy was projected into the Bible, and certain verses from the Hebrew Bible were used to portray blacks as divinely predestined to serve their white lords and masters. This theology highlighted the importance of law and order for the society and thus the system of racial segregation, including brutal military crackdowns on blacks in their Bantustans. The second form of existing theology was called Church Theology. This kind of theology did not necessarily approve of the apartheid ideology but shied away from confronting it. It is a theology that ignores the sociopolitical analysis of the context; it spiritualizes liberation, reducing it to a salvation of the soul, and preaching a cheap version of peace and reconciliation that does not challenge the status quo of segregation but calls for people to love one another – without giving any attention to the power asymmetry.

The third form of theology was called Prophetic Theology. It is a theology that can read the signs of the time (kairos is an Ancient Greek word denoting the opportune moment) and that does not shy away from naming apartheid as a sin against God and the community. This theology preaches the whole gospel with a holistic understanding of liberation: both as the salvation from sin and the liberation from sociopolitical and economic oppression. Prophetic Theology is not a theoretical exercise but a concrete call to action infused by hope. Archbishop Tutu was the embodiment of this Prophetic Theology. For him it was crystal clear that God has created all human beings, black and white, for freedom. Based on this conviction he dared to walk the talk, to speak truth to power, to represent the cause of his people in the world arena, and to tell the South African Pharaoh to “Let my people go!”

These three kinds of theology are not exclusively South African. They are found in Israel today. Zionism with its settler colonial ideology is a kind of a secular state theology that uses the Old Testament as a blueprint to continue the occupation of Palestinian land and bodies. Church Theology is visible in many of the Western theologies that, based on their bad conscience due to the Holocaust, ignore the realities on the ground in Palestine, disregard the nature of the Israeli settler colonial project, and are obsessed with creating occasions for cheap Israeli-Palestinian dialogue that fails to address the core issue at stake. It is for this reason and in the spirit of the South African Kairos Document that in 2009 a group of Palestinian theologians and lay leaders from diverse denominations launched the Kairos Palestine document. In it, they declared that the Israeli occupation is a sin against God and the people; they called for creative resistance and proclaimed that it is high time for liberation from the occupation.

It comes as no surprise that Archbishop Tutu was a strong supporter of the Palestinian struggle for liberation. Tutu’s acquaintance with Palestine reaches as far back as 1966, when he came as a priest to Jerusalem to study Arabic and Greek. Living in East Jerusalem, at Saint George’s College, he was only a few steps away from Mandelbaum Gate that divided the city and segregated its inhabitants. 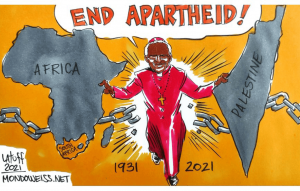 In 1989, at the height of the first Intifada, Tutu came to Palestine on a solidarity visit. No doubt, the archbishop was very well acquainted with uprisings of the oppressed, including his own people in Soweto. Speaking at the Shepherds’ Fields in Beit Sahour – welcomed by thousands of Palestinians, both Christian and Muslim, and representatives of the Israeli peace movement – the archbishop repeatedly pointed to the parallels between South Africa and Israel. He would talk about systemic humiliation and discriminatory laws and then pause to say, “I’m not talking about Israel, I’m talking about South Africa.” The crowd roared with laughter because they knew exactly what he was referring to. Tutu was also one of the first to identify the situation in Israel/Palestine as apartheid, thirty years prior to B’tselem and Human Rights Watch. In fact, based on the constricted geography into which the Israeli state confines the Palestinians, Tutu described the situation in Palestine as worse than South African apartheid. The archbishop was fully aware of the strong ties between the white South African regime and the Israeli state; not only was he able to see firsthand and with his own eyes the parallel ideologies and political structures of both countries, but also, with his heart, he was able to feel the pain of the Palestinian people, a pain he experienced during his entire life.

The early 1990s were years of optimism and change. Following the fall of the Berlin Wall in 1989 came the release of Nelson Mandela from prison in 1990, the Madrid Conference in 1991, the Oslo Accords in 1993, and the dismantling of the South African apartheid state in 1994. These years increased Tutu’s optimism that, like South Africa, Palestine might soon be liberated. He was disappointed.

In 2006, following the Beit Hanoun massacre in which 17 Palestinian civilians were killed by the Israeli military forces, the archbishop headed a United Nations fact-finding mission and submitted a report to the UN Human Rights Council with the results of the investigation. Together with a group called The Elders,* Tutu came another time to Palestine in 2009 with the hope of pushing for a political breakthrough, but this trip also failed to bring about any tangible results. Frustrated with the Israeli policies, and coming from a successful boycott movement that was instrumental in isolating the white South African government and dismantling apartheid, the archbishop did not shy away from supporting the Palestinian BDS movement as a peaceful means to complement efforts to end the Israeli occupation of Palestinian land.

Archbishop Tutu retired from public life in 2010. He was able to see with his own eyes the end of apartheid in his own country. Yet, though blacks are free to vote, and the segregation system is dismantled, economic apartheid is still in place, with whites controlling the land, resources, and economy while most black South Africans still live in poverty in their Bantustans. The recent black leadership proved to be a disappointment to the archbishop and thus became a target for his criticism. One might say that after the collapse of the Soviet Union, the Western empire was able to co-opt the liberation movements in South Africa (ANC) and in Palestine (PLO), engaging them to act as subcontractors who self-govern their people even though structural oppression had not yet (truly) been dismantled. In this sense, the mission has not been fully accomplished in South Africa, and the situation in Palestine has become even worse. Archbishop Desmond Tutu died on December 26, 2021. Palestinians lost a friend and the world a courageous leader. He has shown us the way, but the rest of the journey is for us to complete. Tutu’s legacy challenges us to dare to speak up, to choose sides, and to take a stand. His words still resonate: “If you are neutral in situations of injustice, you have chosen the side of the oppressor. If an elephant has its foot on the tail of a mouse and you say that you are neutral, the mouse will not appreciate your neutrality.”