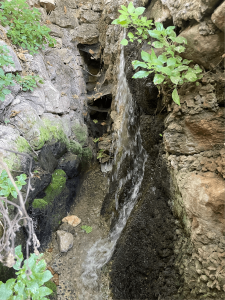 The road suddenly opens up to a lush green valley surrounded by terraces of olive trees. Visitors stop and gasp at the marvelous scene. It’s an oasis in the central hills of Palestine. It is water! 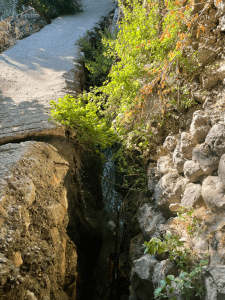 Forty kilometers north of Ramallah, eight kilometers east of Salfit, there is a tiny spring with a trickle of water that flows from a six-meter-high rock in Yasuf. A recently built arena and renovated water reservoir are there to welcome visitors from all over the country. The canal inside the rock through which water has flowed for thousands of years is partially cemented to hold a two-inch faucet. (Location: 32.110572, 35.237514). 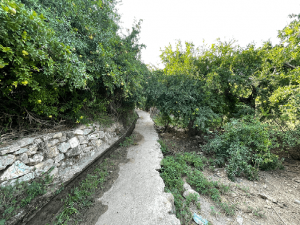 In these semi-arid central hills of Palestine, water is precious. It is preserved, collected, nursed like a baby, admired, watched, and can even be worshipped. The water flows into the gardens (al-janayen) through narrow cemented canals that branch into other canals – left, right, and center – to reach every garden plot.

The indescribably beautiful tiny oasis of al-janayen is dense with sun-drenched pomegranate, fig, and citrus trees that exude a pleasing aroma. A jungle of fig trees? And pomegranates? Yes. 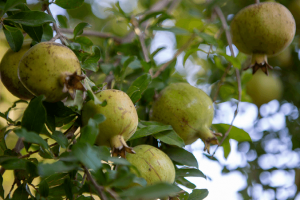 Abu Hussam, Rajeh Etyani, 69, a retired educational supervisor, still remembers the pomegranate bazaar that was held every September until the 1950s. He recalls the guard who used to live just on top of the rock above the spring and whose recompense for protecting the janayen consisted of a small share of pomegranates. Owned by the nine families of Yasuf, the janayen are only 70 dunums (17 acres) in size and are divided into 96 shares. Abu Hussam also recalls the massive number of sheep that used to be brought from the villages surrounding the spring to a bathing structure that was built to be used to treat sheep suffering from sheep scab. A dime was paid for each sheep. 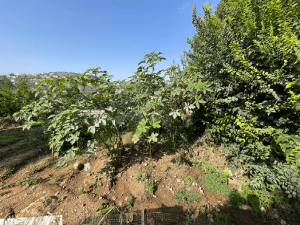 This year, the janayen have not been adequately cared for. The jungle of pomegranates, fig, and citrus has been neglected. Perhaps it’s a good way to preserve its biodiversity. Its people are busy looking for income on the other side of the jungle. The olive terraces on the hills surrounding the spring are a lovely scene, but these agricultural terraces that are hundreds of years old are slowly being abandoned. In the last two decades, there has been growing evidence that people are abandoning the land in favor of working in cities, in both the public and private sectors. Traditional agriculture is no longer appealing, especially since land prices are increasing to accommodate urban expansion. Perhaps the terraces in Palestine should be listed as UNESCO World Heritage.