Having lost his mother when he was two years old, Abd al-Qader could not remember her after her death – but he would never forget the sight of a more lasting mother: the Dome of the Rock, which he could see from his Jerusalem elementary school classroom window. 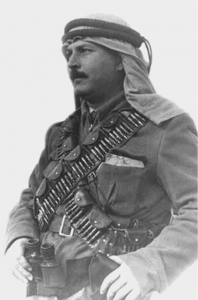 Abd al-Qader was born in 1907 in Istanbul, where his father, Musa Kazim Al-Husseini, a Palestinian dignitary from Jerusalem, was working as a senior public employee. Upon their return to Jerusalem, Abd al-Qader was sent to a good school because his family cherished a proper education. When his father became Jerusalem’s mayor, young Abd al-Qader witnessed closely the turbulent changes that affected this great Palestinian city, particularly after the British occupied Palestine in 1917. Having attended the American University of Beirut and being expelled soon after due to his patriotic activism, he went to the American University of Cairo and finished his chemistry studies quietly to avoid expulsion. During his graduation ceremony, however, he unequivocally criticized the students’ pro-Western agenda, which prompted the American University to withdraw his degree the next day and the Egyptian government to expel him from Egypt.

Two years later, Abd al-Qader realized that chemistry was not the right field for him; he had to fight for Palestine. He assumed the management of the office of the Palestinian Arab Party in Jerusalem. In April 1936, he began to prepare for the armed revolution against the Mandate government to prevent Palestine from falling into the hands of foreign militias coming in from Europe. He helped to form and lead the armed Holy Jihad Organization in the Jerusalem area. In late 1936, the British army captured him, but he was soon able to escape and headed to Damascus. In 1938, he secretly infiltrated Palestine and kept fighting. When he felt he needed more military training, he moved to Lebanon and Iraq and attended courses for officers in Baghdad. In April 1941, he participated in the revolution of the Iraqi National Officers against British forces, led by Prime Minister Rashid Ali Al-Kilani. In Egypt, after the end of World War II, he organized the purchase of weapons that had been left abandoned in the Western Desert after fierce battles during the war and secretly smuggled them to the southern regions of Palestine through El-Arish near the Gazan border, and to its northern regions through the Lebanese port of Sidon.

Abd al-Qader Al-Husseini returned to Palestine in December 1947, sneaking in through the Egyptian border. After the Arab Supreme Committee declared jihad in the wake of the partition decision in November of the same year, he reconstituted the Holy Jihad forces and was chosen as their commander in chief. Under his leadership, Palestinian forces achieved important victories against the Zionist forces in Jerusalem and in the neighboring settlements. His fedayeen team carried out major operations, the most important of which was blowing up the headquarters of the Jewish Agency in Jerusalem, the headquarters of the Zionist movement in the city at that time. 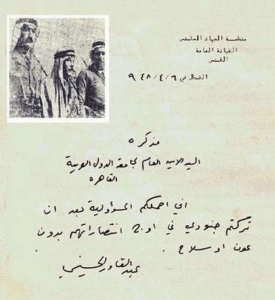 In late March 1948, Abd al-Qader went to Damascus to contact the military committee of the Arab League and ask for weapons equivalent to those of the Zionist forces. When he received a very cold shoulder, he decided to go back and fight with whatever weapons were available, even if that meant his death. In early April, the Zionist militias launched a major attack, trying to capture Jerusalem. Abd al-Qader was staying in the Syrian capital when he heard the news of this attack and of its success in occupying the village of Al-Qastal, a strategic location that overlooked the highway between Jerusalem and Jaffa. Disappointed, he returned to Jerusalem and went straight to the battlefield to lead a desperate counterattack to retake Al-Qastal. He was martyred on April 8, 1948.

Two days later, the Irgun, a Zionist terrorist paramilitary group, committed a massacre in the nearby Palestinian village Deir Yasin.

Abd al-Qader Al-Husseini had a consummate and genuine devotion and love for his country. He was the most prominent Palestinian field commander in guerrilla warfare and the most experienced and effective in urban warfare. He gained the absolute respect and adulation of the Palestinian people for his pride, courage, and integrity.