Courtesy of the Nazareth Cultural and Tourism Association

Like other tourist cities on the rise, Nazareth seeks to keep pace with modern tourism to meet the needs of tourists. Culinary tourism has emerged as one of the essential requirements that must be met in tourist destinations, along with history, heritage, and religious tourism. The visit of modern tourists is no longer limited to sightseeing, recalling history, or praying and worshiping. This includes visiting Palestinian cities with their distinctiveness and historical and religious specificity. A big part of their trip involves enjoying local cuisines and eating at restaurants that have earned favorable reviews from visitors, critics, and specialized magazines.

Up until the end of the 1990s, Nazareth served as a central city for a number of small towns that relied on the Capital of the Galilee commercially.

Given its status as a city with a distinct religious identity and frequently a stopping point in the center of Palestine on the way to the coast or the Upper Galilee, restaurants were unavoidable, whether as a matter of luxury or as a necessity to offer food to visitors from outside the city. Thus, restaurant development and food production gradually increased throughout time, as they did everywhere else in the world. While some restaurants were able to adapt, grow, and keep up with modern developments, others went out of business. 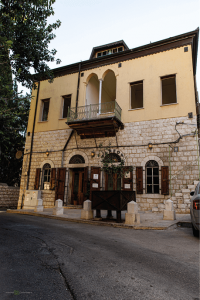 Few people in Nazareth have mastered the art of food preparation, and since the 1960s, some restaurants have been passed down from one generation to another. Like every other society in the world, however, the art of food preparation has evolved, and some young men have chosen to study it in specialized colleges. One of the first people to carry the title of chef in Nazareth may have been Chef Dukhel Safadi, followed by Chef Amin Ziad and others. Today, in 2022, however, Nazareth does have a sizable number of holders of the title of chef who have studied in local and international renowned culinary colleges and academies and have returned to enrich the city with flavors and distinctive dishes. The most notable among them are the young chefs Aseel Sharif and Nizar Jraysi, who took part in the Arabic version of the well-known international competition Top Chef, hosted by MBC TV. They competed against other Arab chefs from various Arab nations and placed first and second, respectively. Chef Sharif advanced to the competition’s final four chefs. As soon as he returned to Nazareth, he improved his father’s bakery, Al-Safadi Bakery, in the Salesian area, by preparing fresh sandwiches daily and the dessert halawet al-jibn (cheese sweets) during Ramadan. 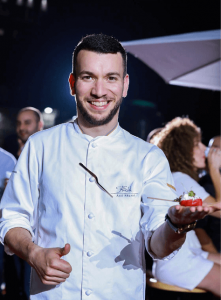 For the purpose of writing this article, and based on the knowledge we have as owners of a website dedicated to promoting the city of Nazareth and its cafés and restaurants, we polled a variety of people, including café and restaurant owners, as well as regular citizens. We asked about the names of the cafés, bakeries, and restaurants that, in their opinion, distinguish Nazareth. In order for the reader to enjoy and benefit from the information provided in this article, we included the website of each restaurant we suggest along with one item from its menu. Here is a guide to Nazareth’s best eateries that were agreed upon by the respondents. We leave to the visitors the pleasure of discovering the entire cuisine selection during their visit to Nazareth.

An old and small restaurant that used to be called Astoria appears at the bottom of a stunning historical photograph of the Basilica of the Annunciation and its surroundings. However, due to urban development in the area and the construction of the square, the building that housed the restaurant was demolished. 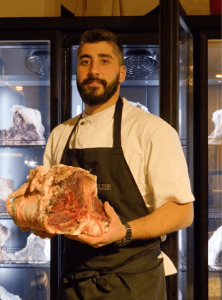 Two of Nazareth’s oldest restaurants are Diana Restaurant (Abu Duhul Restaurant) and Abu Maher Restaurant. Both are located on Paul VI Street and serve grilled meat and Asian cuisine. The former is famous for its kebab halabi dish that consists of minced meat with a spicy tomato sauce and Aleppo pepper, named after the town of Aleppo (Halab).


If you’re looking for a place to try some of the hummus wa ful (chickpea paste and beans) for which the Levant is famous, the locals will most likely point you in the direction of either Abu Abdullah Al-Sherbiny or Al-Sayegh restaurants. The former is located on Paul VI Street and the latter on Tawfiq Ziyad Street (Garages Area). Both restaurants have been in business since the 1960s and have been passed down through families from generation to generation. Dishes such as hummus, musabaha, ful, and falafel are served daily at both restaurants.


One of Nazareth’s best-known restaurants since the turn of the millennium is Al-Reda Restaurant. With a special menu, a view of the Basilica of the Annunciation, and its location in a more than 400-year-old building near the Nazareth Market, it stands out from other restaurants. The restaurant offers a unique menu with special dishes. Simply reading the names of the dishes such as Katura Salad, Gabi Effendi, and Naffakhat dessert tempts the visitor to try them all. Perhaps its most unique meal is the watercress salad with lychee and wild berry fruits.

Another well-known restaurant in Nazareth is Tishreen, found in the Mary’s Well neighborhood. It offers a rich and varied menu that includes freshly baked pastries that are prepared fresh for each visitor in a unique oven that operates around the clock. Meat with coffee sauce is arguably one of the strangest items on its menu.

For those who wish to enjoy a variety of dishes, Mary’s Well Square features a number of restaurants, each with a distinctive menu. Perhaps the best-known among these is JJ Steak House that specializes in serving smoked and grilled meats in addition to unbeatable appetizers such as onions coated in crispy bread and cheese.

If Italian food is what rocks your boat, head to Ronen Restaurant. It is located to the north of Mary’s Well Square along Galilee Street. The restaurant bears the name of its owner, Ronen Khalif, who has received awards from Italy.


Located in the Big Mall at the southern entrance to Nazareth, Luna Bistro is known for its Levantine dishes that are prepared by a group of women. It is run by Luna Nasrallah, a former teacher. The restaurant’s small dishes tempt the visitor to order more grape leaves packed with onions and tomatoes or sweet semolina ma’amoul cakes that are stuffed with walnuts and cinnamon, for example.


There are not many food carts in Nazareth due to the scarcity of a local street food culture. However, if you’re looking for a cart that serves grilled meat, head to Ros al-Jbal Street, close to the Nabi Saeen Mosque. If you’re in the mood for fish, meat, and veggie dishes and sandwiches, visit Chef Hazem Tatour’s Chef on the Road cart at the Dodge Mall (yes, the mall is named after the car!).

The existing street food in Nazareth is distinctive, as restaurants are housed in small buildings on Main Street and open only for a few hours a day. A variety of such restaurants offer delectable food, but they are not always cheap. The best-known of these is Al-Zaeem Grill, located across from Mary’s Well Square. It offers charcoal-grilled meat sandwiches and meals that are fresh and delicious. You can order a sandwich or meal and enjoy it in the modest seating area near the street. Zoubi Shawarma and Falafel is another well-known restaurant that serves street food. It is open only for takeout and situated in the heart of the city next to the fountain. The street restaurant that stands out the most is Ojja Rasmi, located in Al-Midan. It is famous for making omelet sandwiches with aromatic herbs and vegetables and usually opens in the evening.

Nazareth has a large number of bakeries that serve bread along with other types of baked goods stuffed with herbs, meat, and eggs. All lovers of baked goods out there should make sure to add Al-Mashhadawi Bakery to their foodie list. It is located in the Mary’s Well area, opposite Tishreen Restaurant that we mentioned earlier. Customers are lured in by the aromas of thyme, spinach, and cheese that emanate from this restaurant. You can try a variety of baked goods because they are available in small sizes. Try their baked goods with spinach and omelet with sour cheese, and you won’t be disappointed!

You will know you have reached Pizza Gracie when you find a bunch of people waiting in line in front of the bakery on Galilee Street across from Golden Crown Hotel. They are experts in making special cheese-filled baked goodies. Their delicious dough recipe is still a closely guarded family secret. This bakery’s onion and garlic baked goods with tomato paste are a must-try!

If you feel like eating something sweet after leaving Pizza Gracie, all you have to do is take a short walk to Shafa ‘Amer Ice Cream parlor. This ice cream shop had its beginnings rooted in the city of Shafa ‘Amer and sells delicious handmade ice cream flavored with mastic, lemon, and pistachio. Try their tasty Arabic ice cream with mastic and lemon, and you won’t regret it!

If you have a sweet tooth, you should try the oriental Arabic sweets, especially those made by Nazareth’s oldest pastry shop, Al-Mahroum, situated in the heart of the city close to the fountain. You should definitely taste their original knafeh! However, if you prefer sweets with high nutritional value, visit Nazareth Halva Factory, located on the way to the courts area. This factory is known for its first-class sesame-based halva as well as Nazareth tahina, one of the finest tahinis produced in the country.


A trip to Nazareth is not complete without trying the local coffee. There are several traditional coffee roasters in Nazareth, including Fahoum Coffee that has two branches: one near the market, and the other in the city’s center next to Legacy Hotel. If you would like to have a cup of coffee in a classy setting with a contemporary theatrical style and a lively atmosphere, visit Rosé Café, situated in the heart of Nazareth Market. Hisham will welcome you with a smile and offer you an unforgettable cup of coffee.