This article briefly presents cultural resources regarding Jerusalem’s history that include documents and manuscripts as well as registries of the Shari’a Court in Jerusalem. This topic is of significant importance to us as Palestinians because history and media present Palestine as a country that was occupied by Israel under the pretext that it was without residents, and this false assertion is circulating among many people in the world even today. Merely confirming the obvious, this article provides tangible evidence that refutes these allegations. Palestine has been inhabited by hundreds of thousands of Palestinians for very many centuries. This article will limit its scope to sources from the more recent Ottoman period that lasted four centuries, namely from 1517 to 1917.


The thousands of primary sources held by institutions in Jerusalem include a vast number of documents and manuscripts related to the cultural, social, and economic history of Palestine. These institutions include Al-Aqsa Mosque Library; Al-Khalidiya Library; Al-Budiriya Library; Dar Iss’af Al-Nashashibi for Culture, Arts, and Literature; the Armenian Monastery; the Church of St. Anne; the Greek Monastery; and others. Some of the sources they own date back around a thousand years. For example, the Islamic Museum at Al-Haram Al-Sharif possesses around 1,000 documents dating back to the Mamluk period, i.e., 1300–1500.*1 Monasteries such as the Armenian Monastery, the Custody of the Holy Land, and the Greek Orthodox Patriarchate of Jerusalem possess tens of thousands of documents. And Jerusalemite families such as the Al-Khalidi, Al-Husseini, Al-Budairi, and others possess documents, decrees, and personal letters that shed light on the history of Palestine because these families were in control of all cultural, economic, and social aspects of life in Jerusalem.


It should be pointed out that all of the manuscripts in the libraries in Palestinian cities and even the Arab world are threatened by poor storage conditions and neglect. Moreover, parts of these manuscripts have been leaked abroad, likely sold by their heirs for financial returns. Interest in preserving these manuscripts and in publishing indexes varies widely from one country to another. The number of manuscripts in Palestine is estimated to be more than 10,000. They are distributed across the various libraries of Palestinian cities, the most important and numerous, and the Society of the Revival of Islamic Heritage in Abu Dis. However, these restoration centers fall below international standards, mainly for financial reasons: they require expensive restoration materials from Europe, and training courses in restoration methods for staff are available only outside the Arab world and costly.


In a letter from the year 1902, Yousef Dia’ Al-Khalidi discussed the spread of cholera in Palestinian and Jordanian cities such as Gaza, Jaffa, Lod, Amman, and Nablus and mentioned that it had not yet reached Jerusalem, Hebron, or Al-Ramleh. Travelers coming from cities that were not affected by the epidemic were placed in quarantine centers. He also wrote about the affairs of the Sublime Porte, mentioning that ranks, positions, and medals were only obtained by those who took the low road to success. The letter furthermore referred to the amount of rain that fell in Jerusalem in November, and the deaths of Musa Bey Aqel and Ahmad Badawi Bey (Al-Khalidi).

During Ottoman times, the Jerusalem Court was responsible for the residents of the city, their taxes, and the interactions related to their daily life. This included selling and buying, marriage and divorce, job appointments and dismissals, the restoration and rental of real estate as well as transgressions such as murder, theft, adultery, drinking alcohol, and more. Moreover, the court’s jurisdiction extended to the residents of nearby districts, such as Hebron, and supervised and managed life in the rural villages that spread between the mountains of Jerusalem, covering an area 22 miles long and 10 miles wide.*2 Residents of these villages depended on the center to handle their dealings in daily life. The ruler appointed village judges who worked in these areas and moved among the village residents to register marriages and divorces and other financial transactions, such as selling, buying, and more, in official documents.

The Shari’a Court in Jerusalem contains a large number of documents, manuscripts, and registries, some of which date back to AH 936/AD 1529.

Throughout history, ever since the time of Caliph Umar in the AD 630s, the population of Jerusalem consisted of three main religious communities. These communities persisted throughout the times of Sultan Suleiman the Magnificent and the Ottoman period. Muslims constituted the majority, followed by Christians and then Jews. The population of the city was low at the beginning of the Ottoman rule, estimated between 5,000 and 6,000 individuals and increased during the sixteenth century.*3 The population of each religious community was estimated based on the results of a census as well as on the annual jizya (head tax) imposed on Jewish and Christian communities.

Many studies have used the registries of the Shari’a courts as sources for their research that was written in many different languages – some have been published while others have remained in manuscript form. Some of the studies that were held in the Levant will be briefly referred to below.


The registries of Shari’a courts have constituted an important resource for studies that relate to the history of the Ottoman period and were conducted in the second half of the twentieth century. What was published about registries from the Levant in general and Palestine in particular is of significant importance to us because many mention Palestinian concerns. In Syria, Abdul Karim Rafeq pioneered the use of Islamic court registries in his studies to obtain his MA and PhD after writing his doctoral thesis titled “The Province of Damascus.”*4 In Jordan, Muhammad Adnan Al-Bakhit, wrote his doctoral thesis using Shari’a Court sources.*5 In Egypt, the study of the Ottoman era from before the nineteenth century was delayed until, during the 1990s, a group of post-graduate students created a seminar project especially focused on the Ottoman era in order to study registries in Egypt on the many economic, social, and administrative aspects that took place during that period.*6 In Lebanon, Khaled Ziadeh published a book that used the registries of the Tripoli Court as a source,*7 and Nahdi Al-Homsi published a study on Tripoli, using the city registries as a source.*8 In Palestine, from a scientific point of view, Amnon Cohen is considered the pioneer of such studies. He authored more than 20 books and dozens of articles in which his main resource was the registries of the Shari’a Court in Jerusalem. While he touched on many different topics, his focus was mainly on the economic situation and on the condition of the Jews in Jerusalem during the Ottoman period.*9 Cohen also supervised dozens of MA and PhD students who used the registries as a primary source for their theses.*10


As studies that relied on the Islamic court registries burgeoned, scholars began to publish indexes of the registries. A registry is basically a ledger in which information is registered in the form of documents, also known by the terms minute, deed, and argument; any of these terms can be used to describe the writings inside a court register. The University of Jordan was a pioneer in this work. Muhammad Adnan Al-Bakhit supervised a project that adopted the method of publishing each registry separately, summarizing the documents of each registry, and indexing of the names, subjects, and places that were included in each registry.*11 In Lebanon, Khaled Ziadeh and others published the first registry of the city of Tripoli in the early 1980s.*12 They were followed by others who continued to publish indexes and use registries as sources in their studies. In Palestine, indexes of four separate records were created and published by Ibrahim Rabai’a.

The registries of the Shari’a Court in Jerusalem are considered to be among the oldest and most complete of the courts that operated in the cities in the Levant, as one of the oldest registries dates back to mid-April AD 1529, while another registry, held at the Heritage Revival Department in Abu Dis, consists of an inventory of inheritances, dating back to the years AD 1533-1538 (AH 939-945). The responsibility for all these known registries lies with the Chief Justice in Jerusalem. 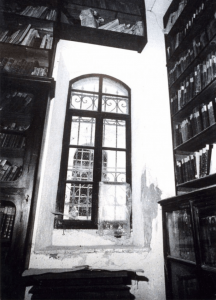 The 565 registries dating back to the Ottoman period mentioned in this article provide an abundance of resources and constitute an inexhaustible treasure trove for researchers. They provide us with knowledge and a better understanding of all aspects of life in the cities under Ottoman rule and illuminate the systems that were running people’s lives.

*1 Donald P. Little, A Catalogue of the Islamic Documents from al-Haram as-Sharif in Jerusalem (Beirut: Orient-Institut, 1984).

*3 Amnon Cohen indicates that these figures, in general, constitute the population of each of the six cities of Palestine in the early sixteenth century, as he mentions in several articles a population increase, based on his studies of the Ottoman tax  registers (Tahrir Defterleri). See, for example: Amnon Cohen and Bernard Lewis, Population and Revenue in the Towns of Palestine in the Sixteenth Century (New Jersey: Princeton University Press, 1978), p. 19; and all articles in Amnon Cohen, Studies on Ottoman Palestine (Farnham, UK: Ashgate Variorum, 2011).

*6 Each seminar focused on a specific topic, such as rural society during the Ottoman era and property in Egyptian society; see Nasser Ibrahim and Imad Hilal (eds.), Justice between the Islamic Law “Shari’a” and Reality in Egypt during the Ottoman Era, supervised by Raouf Abbas (Cairo: Center for Research and Social Studies, Faculty of Arts, Cairo University, 2002).

*7 Khaled Ziadeh, The Traditional Image of Civil Society: A Systematic Reading in the Registry of the Tripoli Shari’a Court in the 17th and Beginning of the 18th Century (Tripoli: The Lebanese University, 1983).

*8 Nahdi Sobhi Al-Homsi, History of Tripoli: Through the Documents of the Shari’a Court in the Second Half of the Seventeenth Century (in Arabic), (Beirut: Al-Resala Foundation, 1986).

*10 Cohen supervised a number of students, among them Oded Peri, who wrote about Christians under Islamic rule in Jerusalem in the seventeenth century, and Mahmoud Yazbek, who wrote about the history of Haifa at the end of the Ottoman period (1864–1914).

*11 A number of registries were published under the supervision of Bakhit at the University of Jordan, at King’s College in London, and in other countries. The following registries were published during different periods of time: Abla Al-Muhtadi, Al-Quds Shari’a Court Registries Nos. 1, 1A, 2, 387, 388, 389 (in Arabic), supervised by Muhammad Adnan Al-Bakhit (Amman: University of Jordan, 2008–2014). A number of similar registries were published with Turkish funding by Ibrahim Rabai’a, a researcher from Jerusalem, including Jerusalem Shari’a Court Records, No. 107, 119, 149 (Istanbul: Research Centre for Islamic History, Art and Culture (IRCICA), 2013–2014), and Ibrahim Rabai’a, Jerusalem Data Bank: Jerusalem Shari’a Court Registry No. 150 (Nablus: An-Najah University, 2011). All records researched and published by Rabai’a date back to the seventeenth century.