A Taste of Gaza

Food and Traditions from Home 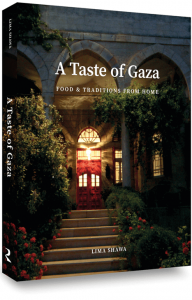 Before Israel’s 1948 war of establishment, Gaza was a gateway to the Levant for both armies and civilians travelling northwards from Egypt and a crossroads for those turning eastwards toward the Arabian hinterland. Palestinian intellectual Edward Said recalled in his memoir, Out of Place, that, in the early 1940s, his family used to take a train from Cairo to Lydda to summer in Ramallah.

Before the Israeli war, the Gaza district had a population of 60–80,000, and by year’s end, 200,000 refugees from 144 towns and villages flooded into a narrow coastal strip two-thirds the size of the Gaza district. Their arrival and presence forever changed the mix of Gaza’s communities, history, traditions, and culture. In this book, Lima Shawa seeks not only to produce recipes but also to provide Gaza’s context before the deluge.

While several Palestinian authors have written extensively about their country’s distinctive national embroideries, Shawa focuses on food as the fundamental expression of communal identity and unity for Gazans, whether living at home or in exile. Shawa cites recipes for Gaza specialties as well as for dishes cooked and consumed by Palestinians outside Gaza and Arabs elsewhere.

The book opens with a description of feasts celebrated by both Muslims and Christians. She harks back to the early twentieth century with the wedding of her paternal grandparents shortly before the World War I collapse of the Ottoman Empire. Her grandmother, who had been evacuated to Jerusalem due to conflict, was conveyed on horseback to Gaza, through unsafe territory by her brother who was an Ottoman soldier. For the families involved, the marriage had to take place in Gaza and according to its customs, which she describes, mentioning foods and drinks served.

Shawa then covers Ramadan and Muslim and Christian festivities before delving into how Gazans responded to the four seasons, and describing pottery used in Gaza kitchens. Having set the scene, she shifts to recipes, starting with soups. Here she mentions that Gazans flavor some, notably the ubiquitous lentil soup, with a spice mix consisting of equal parts ground allspice, black pepper, and cinnamon. 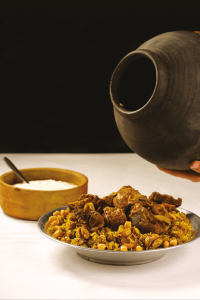 While giving recipes for salads, she points out that tomato and dill salad is a “trademark” Gaza dish and “eaten at any meal.” Another local “trademark” in this salad is the addition of chili pepper “to taste.” Gazans love the sharp, hot taste of chilis and eat both red and green, raw and in relishes.

In the chapter on items Gazans preserve for their pantries, she gives the recipe for ground red chili sauce, which is found on Gazan tables to accompany all varieties of meat and fish dishes and conveys zest to otherwise bland fare.

Shawa gives credit to neighboring Egypt when describing the uniquely Gazan dish that combines two Egyptian staples – dried mallow leaves (mulukhiyah) and dried skinless fava beans (foul). As Gaza stretches 41 kilometers along the Mediterranean, Shawa cites Gaza’s recipe for marinated, fried sardines eaten during fall and spring. Gazans harvest the sea for fish and other seafood if Israel, which controls land, sea, and air access to Gaza, allows fishermen to sail out, set and haul in their nets.

Many of the recipes that Shawa has collected are for age-old dishes made with locally grown vegetables and dried pulses. These dishes can be made in Israeli besieged and blockaded Gaza where imports are curtailed and families struggle to cook and refrigerate food due to electricity cuts.

Shawa’s recipes show that Gaza’s food epitomizes the Mediterranean diet by consisting mainly of healthy, affordable, popular preparations that are called “cucina povera” by Italians proud that their cuisine abounds in such dishes.