In March 8, International Women’s Day, we commemorate the cultural, political, and socioeconomic achievements of women. In Palestine we have historical as well as contemporary female personalities to recognize. Today, however, I will talk about an historic tree: an Oak Tree.

This tree, named Samiha, was born in 1923 in Anabta near Tulkarem. She attended primary school in Nablus and Tulkarem until the seventh grade, then enrolled in the Friends Boarding School in Ramallah. She got married at an early age to Salama Khalil, who lovingly supported her to complete her education. 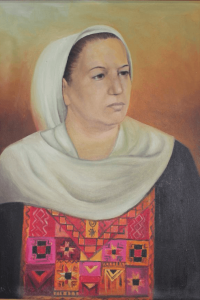 Samiha grew up to become a well-educated woman, a loving mother, a loyal friend, and above all a human spirit grounded in ethical values. Yet, this was not enough for her. She became a pioneer in the Palestinian women’s movement, an activist, fighter, leader, and president of civil associations. In short, she became the “Oak Tree of Palestine.” One of the most loved trees in the world, the oak tree is a symbol of strength, morale, resistance, knowledge, and wisdom. Similarly, towering in strength, Samiha realized the enormous need of the people who had been harmed and driven out of their villages and towns by the Zionist militias and, like the Lady of the Lamp (Florence Nightingale) almost 100 years earlier, she attended to the needs of the refugees displaced by the Nakba in 1948. Samiha worked tirelessly and comprehensively to collect money, clothes, and food from the women around her to help the needy and began to search for ways to empower women, enabling them to play a major role in mitigating this gross injustice inflicted on the Palestinian people.

In 1955, she founded and led the Arab Women’s Union Association in Al-Bireh. In 1965, she founded the Inash al-Usra (revitalization of the family) Society with the help of a group of female volunteers and remained its president until her death. She also assumed active roles in many national women’s committees, such as the General Union of Palestinian Women, the General Union of Women, the Palestinian National Council, and others.
The 1967 Israeli occupation of the West Bank and Gaza precipitated her determination to assume a stronger, more radical, more effective, and sterner role. Just like a small oak seedling grows into a tough and towering tree, Samiha became an icon of national resistance. Providing immediate care, she rushed to the relief of the displaced, especially the people of the villages of Latroun that Israel destroyed immediately after the occupation of the West Bank. She stepped up her struggle to become the only woman in the leadership of the Palestinian National Front in 1973, a political coalition of Palestinian organizations and personalities and partisan trade unions. She was chosen in 1979 as a member of the National Steering Committee, the supreme leadership of the Palestinian people at home.

The Israeli occupation authorities arrested her several times for interrogation and imprisoned her. They also placed her under house arrest in the early eighties for two and a half years and then prevented her from traveling for twelve years.

Samiha was always a passionate advocate of women’s rights. She wanted to communicate a strong message to all women in Palestine when she decided to run for president of Palestine against Yasser Arafat in the 1996 elections even though the odds were clearly against her.

Always maintaining her participation in activities related to culture, heritage, and traditional culture, Samiha also wrote books and started an open journal that continues today, over two decades after her passing, expanded upon regularly by Inash al-Usra. She established a museum for traditional culture and Palestinian heritage.

I had the chance to meet her once. In 1996, when I founded the Bethlehem Academy of Music with the late Samih Murad, we invited her to the opening celebration in the Bethlehem Hotel ballroom. We greatly appreciated her presence and words of encouragement. After signing the guest book, she wished us well: “As long as our society stands on its feet through such organizations as yours, there will be more oak trees blossoming.”
Twenty-three years ago, on February 26, 1999, an epitaph was inscribed on her tombstone that reads: “Samiha Khalil: She fought for the freedom and independence of the Palestinian people.”

However, as she said unequivocally over and over again: “Ancient trees strengthen their stems whenever they are sown and their branches are riven, and the original plants bourgeon and grow stouter as they are separated as their saplings are dispersed. The land that is watered with the blood of innocents will bloom with the most beautiful and thorniest roses.”

The Palestinian Thobe: Our Embroidered History