The Edward Said National Conservatory of Music is “a Palestinian miracle,” in the words of Luisa Morgantini, the former vice-president of the European Parliament. The first music school in Palestine, the conservatory had a modest beginning in 1993, with 40 students, three part-time teachers, and a volunteer director housed in the attic of an old building in Ramallah. It soon became one of the leading music schools in the Arab world, with an international reputation for academic excellence and grassroots musical achievements. The Edward Said National Conservatory of Music (ESNCM), the name it adopted in 2004 to honor Edward Said who had been a member of the conservatory’s honorary board), has created a musical revolution in a land that has been revolting against foreign occupations for more than a century. Today the ESNCM provides music education for about 2,000 students who study in its seven branches across Palestine as well as in its outreach programs in refugee camps, schools managed by the United Nations, and other underprivileged areas. The odds against which the institution has had to struggle to succeed have been enormous. Because of that, the ESNCM is a miracle that deserves the world’s attention and recognition.


Since its inception, the ESNCM has attempted to carry out its fundamental mission to bring music to every Palestinian home. The conservatory founders believed that music had to be an essential part of any Palestinian child’s upbringing. Furthermore, they saw music as a form of national pride as well as a method of peaceful resistance to the inhuman acts committed against their people. Their own Arabic music had to be preserved and developed, and this goal has undoubtedly been achieved. Furthermore, their love and admiration of classical Western music led them to build their academic program around its particular advantages and strengths.


From day one, realizing that music conservatory education is a costly endeavor, the ESNCM set up a scholarship scheme that opened the school to all Palestinian children and youth, regardless of their economic backgrounds. Thousands of students have benefitted from this scheme, many of whom have grown to become world-class musicians. The ESNCM has used the generous donations of friends and partners very wisely and with utmost transparency. This virtue has been essential to the integrity and good reputation of the institute. Palestinians and internationals who work at the ESNCM not only possess a high level of expertise in their profession, they are also devoted human beings who are very committed to their students and to the vision of the conservatory as it tries its best to make a difference in Palestine and worldwide as an ambassador of Palestinian culture through music. The mission of the school and the veracity of its founders and staff have made this a one-of-a-kind conservatory of music. This dedication has indeed and on several occasions witnessed teachers risk their lives trying to bypass military checkpoints and the isolation wall for the sole purpose of getting to their students and giving them their weekly music lessons. 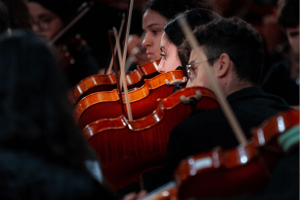 The ESNCM is also unique because, in addition to teaching music, it has been involved in many aspects of music creation in Palestine. The school strongly believes that parallel to nurturing young musicians, it also needs to build an audience that appreciates the talents of those musicians. Otherwise, the ESNCM imagines they would be promoting musical brain drain through immigration, a phenomenon that is apparent in neighboring countries. For that reason, the conservatory has put a lot of effort and resources into audience building with great success. The ESNCM organizes hundreds of concerts yearly, and the audiences have been growing in their thousands. The school founded several music festivals that have become an essential part of the cultural landscape of Palestine. These include the Layali al-Tarab Festival in East Jerusalem that is dedicated to promoting the classical Arabic tarab music style (literally: rapture, describing music of high emotional content); the Christmas Festival in Bethlehem; and the Sea and Freedom Festival in Gaza. The Gaza music school that manages this festival against all odds is a unique story on its own. Founded in 2008, the school has faced enormous challenges under siege and has lived through three wars, one of which destroyed the school and its musical instruments. Like a phoenix, however, the school rose from the ashes, relocated, and continued to provide its services to the hundreds of students that study music there and to the network of choirs spread around the Gaza Strip. As Gaza is under siege and full closure, the ESNCM has complemented the teaching program with online teaching. Tutors from the Trinity Laban Conservatoire of Music and Dance in London through PalMusic, the Friends of the Conservatory in the United Kingdom, have been taking part in this endeavor, teaching students of the Western classical music section in Gaza with outstanding results. 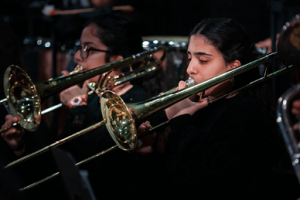 In the field of Arabic music development, the ESNCM has been a pioneer. Its well-developed curricula, examination system, and related music resources have gained it Arab recognition and the special award of the Arab Academy of Music (a pan-Arab organization that operates under the auspices of the Arab League). Furthermore, the conservatory has, along with other partners, developed an educational website for students at large that aims to help them understand the Arabic music maqamat (plural of maqam, a vast collection of unique scales that use quarter tones) and the ways of improvisation that are unique to its system. The ESNCM has also developed its own exclusive Arabic percussion educational program and is currently developing a new orchestra based on the elements of authentic Arabic music in which its different instruments are represented according to audio research on their timbre, volume, frequencies, and tone color. This unprecedented attempt to enlarge the Arabic music ensemble using its elements and structures will no doubt have a significant historical effect on the Arabic classical music scene in the future. 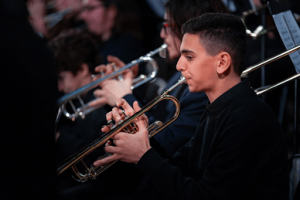 The ESNCM has also been a pioneer in the Arab world in the creation of Western-style orchestras. Its flagship is the Palestine Youth Orchestra (PYO). Founded in 2004, the orchestra is made up of young Palestinian musicians from all over the world as a gesture of Palestinian unity. The PYO’s annual world tours have brought international acclaim and featured the orchestra in famous concert halls. Its latest performance took place at the Concertgebouw concert hall in Amsterdam in August of 2019. The PYO repertoire has always included compositions of Palestinian and Arab musicians, an element that has shaped the orchestra’s inimitability. The Palestine Strings, formed largely by string players of the PYO, can also boast historic performances, most importantly its exceptional interpretation of Vivaldi’s Four Seasons with Nigel Kennedy at the Royal Albert Hall in 2013 as part of the BBC proms. Such Arabic interpretations and excursions into classical and jazz styles have not only constructed musical bridges between East and West but also participated in the creation of a new genre of music and knowledge that has great potential to develop and evolve.


In addition to the Arab Academy award, the ESNCM also received two prestigious prizes from the Welfare Association, a reputable Palestinian philanthropic society registered in Switzerland. The first honored the ESNCM director for his vision and contribution towards the promotion of music in Palestine, and the second highlighted the ESNCM’s role in the advancement of cultural life in East Jerusalem. Among the many Arabic music ensembles that the conservatory has established are Banat al-Quds (Daughters of Jerusalem), an all-girls ensemble of around 35 members who create a three-voice choir, a rare phenomenon in Arabic music. It is important to note that the ESNCM places particular emphasis on female participation in its programs and activities. Its yearly enrollment is more than 60 percent female.

Production and publication units make up a portion of the ESNCM portfolio. The school puts special emphasis on the publication of culture-friendly music, which has included in the past, among other publications, a piano beginner’s book with Arabic songs and melodies. These units also celebrate the centennials of Palestinian composers by rediscovering, publishing, and recording their music, much of which has never before been heard or performed. With a state-of-the-art recording studio in its Ramallah premises, the conservatory has made its facility available to Palestinian musicians and composers to record and promote their music.

During the last ten years, the ESNCM fundraised extensively in order to acquire new premises for its activities and teaching in response to the enormous growth and demand for music education and performance. Thus, the conservatory has been able to build new premises in Ramallah and Bethlehem and renovated an old mansion in Jerusalem, making a significant impact on the perception of music and music education within the society and providing new creative spaces for young Palestinians.

It is impressive to see how the ESNCM has managed to keep going and growing despite the many massive challenges it faces. International teachers are often denied visa extensions and asked to leave the country in the middle of an academic year. Teachers who commute between branches of the conservatory are often turned back at checkpoints. Participants in orchestras are often banned from leaving their areas, as in the case of Gazans, or from entering Palestine, in the case of expatriates. A big part of the biannual national music competition organized by the ESNCM is done through video conferencing due to the inability to bring all participants under one roof. 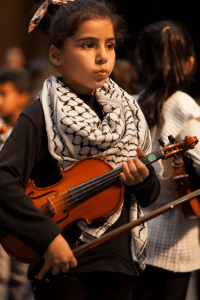 In 2003, the ESNCM initiated the foundation of the Forum of Arab Conservatories of Music. A year later, it produced the first Palestinian musical, Al-Fawanees, performed by children, which brought together 100 young singers, actors, and musicians. Due to its success, the musical was recreated and performed for thousands of spectators in 2019. In 2016, the conservatory’s efforts to create an Arabic music performance degree at Birzeit University bore fruit, as the program was officially opened.

The ESNCM is a fascinating world success story of music, humanity, humility, and devotion. It is time for the world to recognize this impressive work of a team of more than a hundred teachers, employees, and administrators and the dedication of thousands of young Palestinian musicians and students. The ESNCM community has offered the world a different image of Palestine and has changed many Palestinian lives through providing young people with knowledge and hope for a better future.