The Longest Trip for the Shortest Distance

“Show, don’t tell.” This is what great filmmakers teach and what powerful cinema does. The task may be particularly challenging for Palestinian films, whose unique circumstances are often too difficult to explain. Yet here comes a film that steers clear of political jargon and moral statements. 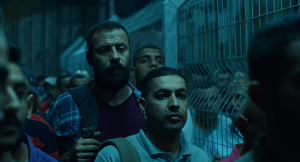 Ameen Nayfeh, the young director, describes this film as “the project of his life.” It is distilled from his experience of having a father from Tulkarem and a mother from ‘Ar’ara. Walled-off by the separation wall, he lived his childhood in a place that he can no longer visit. “This kind of pain is indescribable,” he notes, yet he still refuses to show Palestinians as victims. This approach has done wonders for 200 METERS, Nayfeh’s debut feature released in 2020.

The story line is about Mustafa (played by Ali Suleiman), father of three and husband of Salwa (Lana Zreik). Unlike his wife, Mustafa does not have Israeli residency, which constitutes a major obstacle that seriously affects his ability to work or even to visit his wife and children. The family has no choice but to live in two houses, each of which is literally separated by 200 meters.

Essentially, the film portrays how a simple act of going from one place to another is not only a luxury but also a risk beyond remedy for Palestinians. It provides valuable insight into the ways that the political reality shifts power dynamics and influences relationships.

The compelling performance of Ali Suleiman captures the internal dilemma of his character who maneuvers through life without having movement authorization papers. Generally unfazed, Mustafa simply wants to reach his target. Despite his work ethic and principles, it is nearly impossible for him to carry on without having to break some rules.

On a deeper level, the film shows the social and political sense of impotence that would invade the psyche of a man who is deprived of carrying out his role as husband, father, and caretaker. Interestingly, this couple – two people who live only 200 meters apart – function almost as though they were in a long-distance relationship; so close yet so out of reach.

The film also provides a study of laborers whose experience of being transported feels like bootlegging of some sort – except that it’s not substances that are being smuggled but actual human beings. Those familiar with Ghassan Kanafani’s novel Men in the Sun may recall a horrid image that is represented in the film’s claustrophobic scene inside the trunk of a car.

Worthy mentions are Anna Unterberger (as the German Anne) and Motaz Malhees (as Kifah), and the discernment of privileges attained by a select few. Equally impressive are the film’s cinematography and the hard work of the producer, May Odeh. The film has gained close to 20 awards and won the audience award at the Venice Festival. 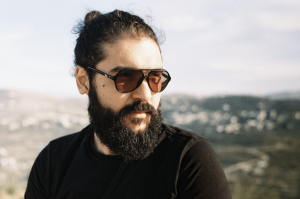 200 METERS is definitely a fun road movie that even Palestinians will enjoy watching. As director Ameen Nayfeh notes: “It is my story and the story of thousands of Palestinians.”